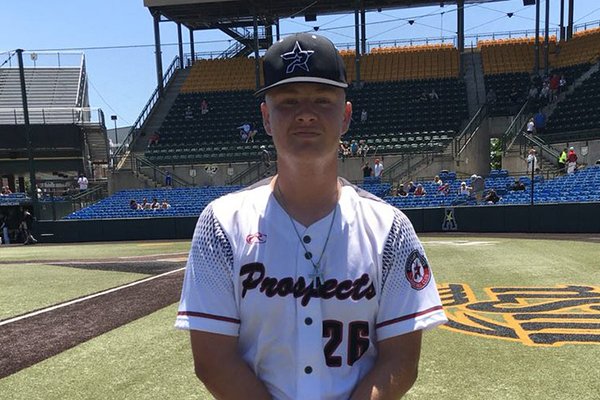 Arkansas Prospects coach Andy Menard watched Isaac Mitchell throw one pitch on video and knew he wanted the left-hander on his team.

The first time Menard saw Mitchell pitch in person, Mitchell (6-4, 205) struck out 14 and recorded his first no-hitter in a 2-1 Prospects win in early June. This weekend, the Nixa, Mo., native became the sixth member of Arkansas’ 2021 recruiting class.

“He’s got a great frame, he’s a mid-80s arm, three-pitch mix and basically fills the zone up with those three pitches,” Menard said. “For a 15-year-old kid, there’s a lot to like. I think there’s a lot in that arm, and I think you’ll see him eventually be a low-90s arm when he gets to Arkansas.”

Mitchell, who was in attendance for Game 2 of the Fayetteville super regional in June, said he models his pitching style after Los Angeles Dodgers lefty Clayton Kershaw. As a freshman at Nixa, Mitchell struck out 56 and walked 13 over 49 innings pitched.

“Their year this year in Omaha helped a lot with the decision just because of how close they were,” he said. “(Johnson) is the one who recruited me. I loved him from the first time I talked to him. If it wasn’t for him I probably wouldn’t have made that decision.

“I just felt like it was the right fit for me,” he added. “I went down there yesterday and got to go through all their facilities and all that, and I couldn’t have loved it more – the campus and everything.”

Mitchell’s summer travel team is currently 31-1. Menard said he isn’t sure what Mitchell’s earned run average is, “but he’s hardly given up anything all summer.”

“Normally, you get a lot of high-profile guys together there’s a lot of butting heads and jealousy, but there’s none of that with these guys,” he said. “They’re class acts. That’s one of the unique things about this group.”

Mitchell watched each of Arkansas’ College World Series games, and hopes to be an arm that leads the Razorbacks back to Omaha in the future.

“I try hard, I’m competitive and I want to win,” he said. “That’s what made me want to go there. It’s going to be hard work, but they’re going to push you to win.”