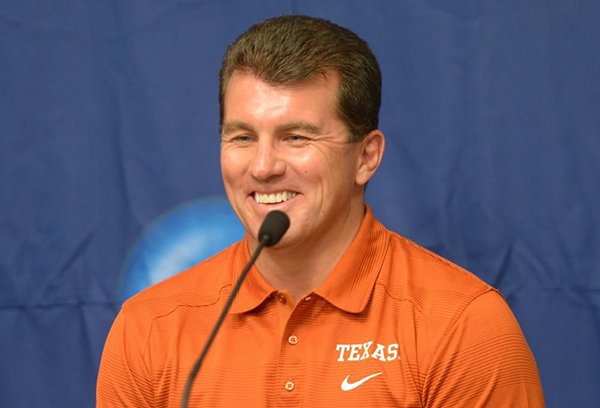 Mario Sategna, who was Texas' head coach for its men's and women's teams the previous five years, is joining the University of Arkansas, Fayetteville to coach field events, Bucknam announced Monday.

COLLEGE CAREER Three-time All-American in the decathlon at LSU, and the 1995 NCAA champion

Sategna (pronounced suh-TANE-yuh) replaces Travis Geopfert, who resigned at Arkansas to accept the associate head coaching job at Tennessee. Sategna was an eight-time Big 12 Coach of the Year and two-time national assistant coach of the year in 15 years at Texas.

"We're thrilled that we have somebody that was available with Mario's expertise and capabilities," Bucknam said. "I've known him for 20-plus years and always admired the success he's had.

"We feel like we just hit a home run."

Sategna, 45, was fired at Texas on Feb. 15 by new Longhorns Athletic Director Chris Del Conte, who had been on the job for two months.

Del Conte said the program needed a new direction after Sategna resumed his head coaching duties Jan. 11, 2017, after a leave of absence he requested and began taking Sept. 12, 2016.

"It was a personal issue," Bucknam said of the reason Sategna stepped away from coaching for four months. "He was able to get that rectified and get back working again. It had nothing to do with the health and welfare of any student-athletes or anything like that.

"I feel confident that he's going to make a huge, positive impact on our program. To have somebody with his wealth of experience means a lot."

The Austin American-Statesman reported in October 2016 that Sategna was the subject of an ethics and misconduct investigation by Texas, but school officials blocked the release of his personnel file.

Texas allowed Sategna to resume his coaching duties without revealing any details of its investigation, but the Longhorns' athletic directors at the time -- Mike Perrin (men) and Chris Plonsky (women) -- issued a joint statement that all the concerns brought to their attention had been addressed.

"I'm very thankful to my wife, my children and our extended family, and for the outpouring of support I received during my time away," Sategna said in a statement when he resumed coaching. "A lot of people have helped me over these four months, and I'm extremely appreciative of that.

"I've had the opportunity ... to transform my life in so many different facets, and I'm excited to embark upon this next chapter and continue to be a part of the University of Texas."

Bucknam said Arkansas administrators are aware of the details regarding Sategna's leave of absence at Texas and were involved in his hiring process with the Razorbacks.

"This wasn't done in a vacuum," Bucknam said.

Del Conte hired Edrick Floreal, an NCAA triple jump champion at Arkansas, away from Kentucky to be Texas' new coach.

Sategna led the Texas men and women to a combined 11 Big 12 championships -- including three consecutive men's outdoor titles from 2015-17 -- along with 80 Big 12 individual champions and 118 All-Americans. He also led Texas to 11 top-10 NCAA team finishes, including two second-place finishes.

"I am honored for the opportunity to coach at the most successful men's track & field program in the history of the NCAA," Sategna said in an Arkansas news release. "To be a part of a program with such a rich history and a tradition of winning is truly an honor."

Sategna, a native of Bloomfield, N.M., is returning to the SEC, where he was a three-time All-American at LSU and won the 1995 NCAA title in the decathlon. He was an assistant coach at Wichita State and Minnesota before going to Texas. He began his coaching career at LSU as a volunteer assistant in 1996, and taught and coached at Albuquerque (N.M.) Academy.

Bucknam said he considered more than 40 coaches before hiring Sategna.

"There was a lot of interest, and that's what we had to sort through," Bucknam said. "It took a little bit of time, but I feel like we came up with the right guy."