HOG FUTURES: DB from Ashdown a stickler for rules 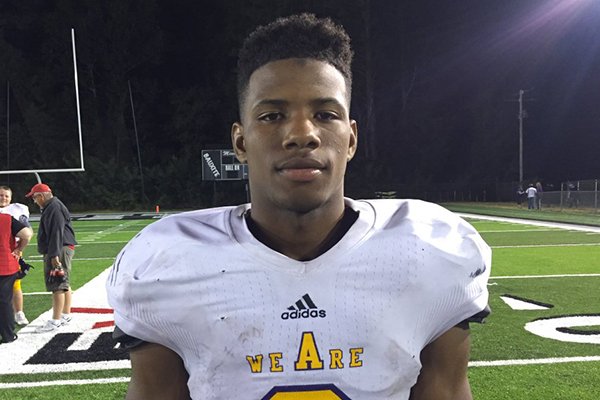 Ladarrius Bishop is considered a fun-loving young man most of the time. He also has a serious side, especially when it comes to the weight room.

During his sophomore season at Ashdown High School, Bishop and his teammates were going through their daily routine when a college coach came for a recruiting visit.

"We have a rule that when we practice, we don't sit down," Ashdown Coach Matt Richardson said. "If you get tired you can take a knee, but we don't sit."

The visiting coach was not aware of the no sitting directive, but Bishop was quick to inform the Panthers' guest that no one was above breaking the rules.

"Ladarrius went right up to him and said, 'You can't sit down,' " Richardson said. "He made an impression when he did that."

"I was serious," Bishop said. "You don't sit while we lift weights. He stood up, but I think he took it as a joke."

It is no joke that Bishop's talents have made him the life of the football party. A four-star recruit according to Rivals, Bishop's speed makes him a contender to make an early contribution in the University of Arkansas, Fayetteville secondary.

"Speed kills," Richardson said. "And that's what's killed [Arkansas] the last few seasons. The truth is that the Razorbacks have not been fast enough to compete against a lot of teams in the Southeastern Conference. Ladarrius is going to help with that."

Bishop won the 100- and 200-meter races at the 2017 Class 4A state track meet, but he did not compete in the 2018 state track meet because of torn ligaments in his ankle. Richardson said Bishop is "100 percent healthy now."

"He either had an [interception] or a special teams score in four of our first five games," Richardson said. "Other teams started to kick away from him. But if they made a mistake, they would see just how explosive he could be."

Bishop originally committed to play for Mississippi State, but when Arkansas hired Chad Morris as its new coach, Bishop made the switch to the Razorbacks.

"Anthony had nothing but good things to say about Coach Morris, and that was a big factor for me," Bishop said.

Richardson said the Razorbacks will enjoy having Bishop on the roster for reasons other than his ability.

Noteworthy Son of Lance Bishop and Courtney French. … A four-star recruit, according to Rivals. … Rated as the No. 2 player in the state of Arkansas and the No. 28 cornerback in the nation by Rivals. … Clocked in at 4.37 in the 40-yard dash. … As a senior, rushed for 249 yards and 3 TDs in 25 carries. Added 29 receptions for 485 yards and 5 TDs. … Had nine tackles and intercepted two passes. … As a junior, he registered 36 tackles and intercepted one pass. … Chose Arkansas over Florida, Mississippi State, Oklahoma State, Baylor, Memphis, Purdue, Illinois and Iowa State.