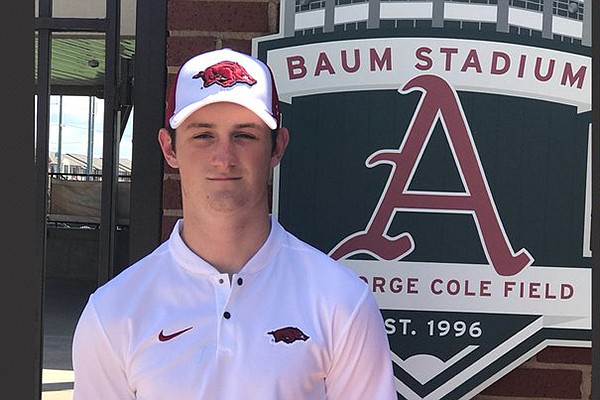 While most eyes yesterday were rightfully fixated on the football program's recruiting efforts, Dave Van Horn added another piece to his 2019 class.

Right-handed pitcher Kevin Heinrich (6-3, 180) of Coral Springs, Fla., committed to the Razorbacks on Friday. Heinrich becomes the 18th member of the class and the 11th pitcher – eighth right-hander – to pledge to Arkansas.

"I absolutely fell in love with the school as soon as I stepped on campus with just the baseball facilities, the school itself, the surrounding areas," said Heinrich, who was also considering Florida, Appalachian State, Charlotte and Rutgers. "Being from Florida, I just want to get away and go see the seasons a little bit.

"I was with (Arkansas') coaches, I was already there, so I might as well go ahead and do it," he added. "I had a bunch of schools waiting on me to see when I was going to commit, so this fits in my timeline."

Heinrich finished his junior season at Marjory Stoneman Douglas High School with a 4-2 record and a 5.60 ERA in nine appearances, per the school's MaxPreps page. He struck out 25 and walked 27 over 25 innings pitched.

His best outing of the season came April 6 in a 4-1 win over Coral Glades in which he went 5 1/3 innings, allowed two hits, one earned run and struck out eight. Heinrich says he didn't have a great spring this year given all that transpired at the high school, but he is enjoying what he called "one of my best summers" on the mound, where he mixes a fastball, 12-6 and 1-7 curveball and a changeup.

"I’m hard-working, very dedicated and don’t ever like to quit on something," said Heinrich, who models his pitching style to the New York Mets' Noah Syndergaard. "If I start something, I’m going to stick to it to the best of my ability and become the best pitcher I can be."

Heinrich is eager to continue picking pitching coach Wes Johnson's brain about pitching and the science behind it.

"It’s incredible what knowledge he has and how he uses it to create incredible pitchers and make the pitcher as good as he can be," he said.