Pair of guards getting the attention of Arkansas 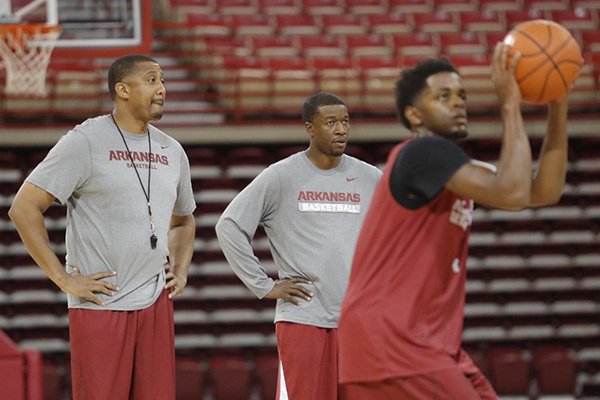 LAS VEGAS -- Two highly touted members of the Memphis based 17-under Team Thad are getting a good dose of love from the University of Arkansas.

Guard Jaywon Walton, 6-6, 200 pounds, of Montgomery (Ala.) Carver has 25 plus scholarship offers from schools like Arkansas, Florida, Alabama, Auburn, Georgia, Mississippi State, Memphis, Louisville and TCU among others.

He's being recruited by assistant Scotty Thurman, who's known for hitting the go-ahead three-pointer help to defeat Duke for the 1994 national championship.

"Scotty Thurman, he's a legend at Arkansas and just to get a text or call from him, that's big" said Walton.

Walton is an ESPN 4-star prospect, No. 14 small forward and No. 68 overall prospect in the nation for the 2019 class. He averaged 17 points in leading the Wolverines to a state title as a junior and being named a first-team Class 6A all-state selection.

Thurman is trying to get him to Fayetteville for a visit. Walton likes to learn from others that played before him, including Thurman.

"Watching his highlights and taking parts of his game and trying to use in mine," Walton said. "That can help me a lot."

Guard Matthew Murrell, 6-3, 188, of Memphis Whitehaven is an impressive 2020 prospect that played up with the 17-year-old team and has been adding scholarship offers because of his play.

Tennessee and Texas A&M offered Murrell during the Under Armour Finals Las Vegas last week to go along with offers from Florida, Memphis, Iowa State, Ole Miss and St. Louis.

The Hogs are showing strong interest in Murrell, who's being recruited by assistant TJ Cleveland.

"He's just been telling me they're interested and they're going to keeping touch with me," Murrell said. "I like him as a coach. We're starting to talk more."

Murrell averaged 16.3 points, 4.4 rebounds, 1.4 assists and 1.4 steals for Whitehaven going into the playoffs as a sophomore. He has interest in the Razorbacks.

"I'm interested in them. Arkansas has always had a good look of being in the SEC," Murrell said. "I like how they like to play up and down. I try and thrive on the fast break, try to get steals and just be explosive. I'm a slasher, but I can pull up and can shoot the three."

He said the right fit is important as he makes his college decision.

"Do they play my style and who's going to put me into the best position to get to the next level," Murrell said.