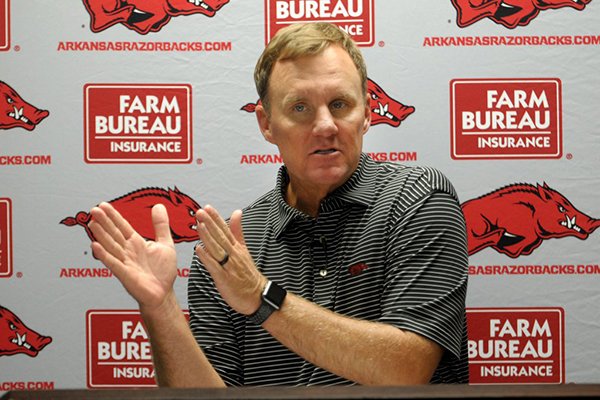 Arkansas football coach Chad Morris speaks to members of the media at a press conference on Monday, July 30, 2018 at Paradise Valley Golf & Athletic Club in Fayetteville.

One of the top junior prospects in Texas visited Arkansas for the Wooo Pig Nic on Friday and left Fayetteville with the Hogs as one of his top three schools.

Prospects and family members were able to mix and mingle with coach Chad Morris and staff and their families while eating tacos, burgers, hot dogs and a variety of other food.

“It has a good family environment,” Omeire said. “We didn’t get to see a lot because of construction, but I could tell coach Morris is doing a lot for the program with all the new things he is putting in.”

“Me and Coach Bolden had a conversation and watched a video of all the receivers who came to the school,” Omeire said. “Mike Woods was in the room, too.”

He recorded 38 receptions for 744 yards and 8 touchdowns as a sophomore. Omeire took notice of Bolden’s relationships with the Razorbacks receivers.

“All the players treated him with respect,” Omeire said.

After experiencing the environment of the Razorbacks program, Omeire said Arkansas joined Texas and Texas A&M as his top three schools because of the offense, coaches and the players.

“The players act like me, and the coaches want to see you successful on and off the field," he said.

Omeire plans to attend an Arkansas game in the fall, he said.