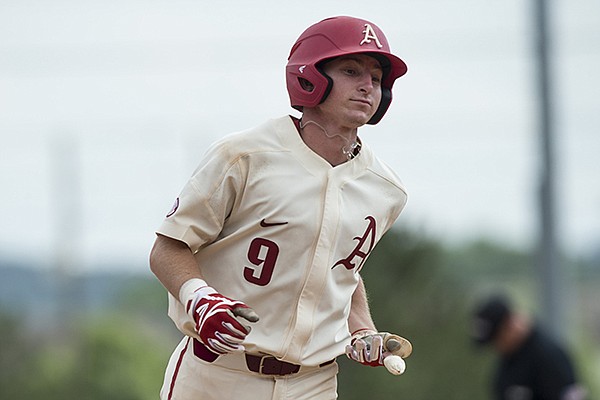 Jax Biggers of Arkansas hits a two-run homer in the 6th inning against Oral Roberts Friday, June 1, 2018, during game one of the NCAA regional at Baum Stadium. Arkansas won 10-2.

FAYETTEVILLE — It wasn't long ago that Jax Biggers took the batting glove off his left hand and saw a deformed, bloody index finger.

The tip of Biggers' finger was crushed. He began to feel queasy, then physically weak, too.

Friday, his Nine Finger Dinger contributed to an explosive offensive start to the NCAA Fayetteville Regional at Baum Stadium. Biggers and Arkansas rolled Oral Roberts 10-2 before a crowd of greater than 9,200.

Oral Roberts starter Justin McGregor, who got the nod instead of star left-hander Miguel Ausua, was pulled in the sixth after a Carson Shaddy home run to left-center and Jared Gates' double off the wall in right on the next pitch. Reliever Brady Womacks entered, and Dave Van Horn summoned Biggers, who was on deck.

Van Horn said the two talked Womacks' pitch selection, but he had a bit of fun with the conversation after the win.

"I told him to hit a home run," Van Horn said laughing. "(I told him) just get something that’s up in the zone a little bit. He got him a good pitch and he hammered it."

Biggers, who went 3-for-6 in two games in the SEC Tournament in Hoover, improved to 5-for-10 while wearing the heavily taped splint on his finger. The two-run shot was his first home run since an 8-7 win against Memphis on March 27.

It was also Biggers' first runs driven in since April 10 against Grambling State in North Little Rock – a stretch of 15 games played with at least one at-bat.

"I'll tell you what, I kind of kidded with him the other day, 'If I’d known you were going to swing the bat this good we would have smashed your finger a long time ago,'" Van Horn said. "He’s swinging the bat now like he did last year.

"And I think he just needed a little time mentally to get away and be off to the side and realize, ‘It’s not as hard as I’m making it out to be in my mind.’"

With a slight breeze blowing in from right field, about the last thing Van Horn expected was Biggers to hit a home run, especially in that direction. Biggers' home run capped a four-run sixth inning that ballooned Arkansas' lead to 6-1 and gave Razorbacks starter Blaine Knight more than enough run support.

“It’s good,” ORU coach Ryan Folmar said of the Razorbacks' lineup, which had 10 players record a hit. “They have depth to their lineup and they had some damage done at the bottom of their lineup (five RBIs from 6-9 hitters). I thought Biggers had several good at-bats today and Grant (Koch) was good, too."

On a day when the Razorbacks out-hit ORU 14-5 and SEC Freshman of the Year Heston Kjerstad hit two home runs in his first regional appearance, the most encouraging note may have been Biggers' continued production at the bottom of the order.

Biggers also led off the third inning with a single, setting the table for the heart of Arkansas' lineup and Kjerstad's first home run.

"Just doing a good job I think of trying to shoot the ball through the middle," Van Horn said of Biggers. "His swing seemed a little shorter to me.

"It’s been good to see that. It’s been pretty impressive to me."