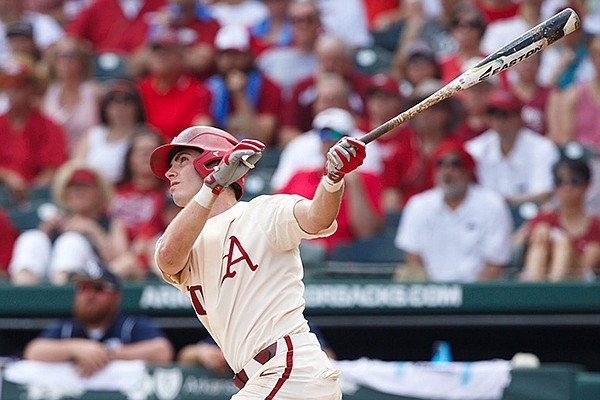 Arkansas second baseman Carson Shaddy hits a home run during the sixth inning of an NCAA Tournament game against Oral Roberts on Friday, June 1, 2018, in Fayetteville.

FAYETTEVILLE — It took a failed offensive maneuver to get Arkansas' powerful lineup going in a 10-2 win over Oral Roberts on Friday.

After reaching on a four-pitch walk to lead off the bottom of the sixth inning, Dominic Fletcher was thrown out at second base when Carson Shaddy couldn't make contact with a pitch low and outside on a called hit-and-run. One pitch later the floodgates opened.

Shaddy drove a 2-2 fastball from Justin McGregor into the left field Hog Pen to give Arkansas a 3-1 lead. It was the All-SEC second baseman's first hit in his previous 16 at-bats and ignited an offensive explosion over the Razorbacks' final three innings at the plate.

Jared Gates followed with a double off the right field wall one pitch later to chase Oral Roberts starter Justin McGregor. After the pitching change, Grant Koch hit a bloop RBI single into left field. Jax Biggers, who conferred with Arkansas coach Dave Van Horn before his at-bat, used his nine good fingers to drive a second-pitch fastball into the right field bullpen for the Razorbacks' third home run of the game.

When the inning was finished, Arkansas had put six hitters on base, sent ORU to the bullpen twice and taken a 6-1 lead in a game it had led by only a run through 5 1/3 innings.

The Razorbacks recorded 10 of their 14 hits in the sixth, seventh and eighth innings after struggling to create separation from the Golden Eagles in the early going.

Arkansas' only runs prior to Shaddy's home run came in the third inning when Heston Kjerstad drove a 2-0 pitch to the opposite field for a two-run home run. The Razorbacks stranded five runners over the first five innings, including three in scoring position.

That put pressure on starter Blaine Knight to deliver another strong performance. In what could be his final home start, Knight worked his breaking ball masterfully and held ORU to just three hits in eight innings, tying the longest start of his career.

Knight, who was named to a couple of All-America teams Thursday, improved to 11-0 and lowered his ERA to 2.74 in what might be the best campaign ever for an Arkansas starting pitcher. The Razorbacks are 13-3 in games he has started, including wins over five pitchers who are projected first-round picks in next week's MLB Draft.

Knight is a projected second rounder.

ORU catcher Riley Keizor provided the Golden Eagles' only runs, with solo home runs off Knight to lead off the fifth and with two outs in the seventh. Knight, who has allowed a home run in seven consecutive starts and two home runs three times during that span, retired 24 of the other 27 batters he faced.

ORU couldn't match Arkansas' power. Kjerstad's two-run home run in the eighth was the Razorbacks' fourth of the game and 88th of the season - third-best in college baseball and four shy of the single-season school record set by a 2010 team that hit nine homers in its first regional game against Grambling State, also an early start at Baum Stadium.

None of Friday's home runs were wind aided, but instead muscled out against a slight south breeze. It surprised no one who has watched Arkansas at Baum this season. The Razorbacks have hit 55 home runs in 33 home games.

That kind of power has provided several quick-strike innings like the sixth Friday, and has helped the Razorbacks to their great 30-3 record in Fayetteville.

Arkansas gets an opportunity for its record-tying 31st win Saturday night against the winner of Friday night's game between Southern Miss and Dallas Baptist.