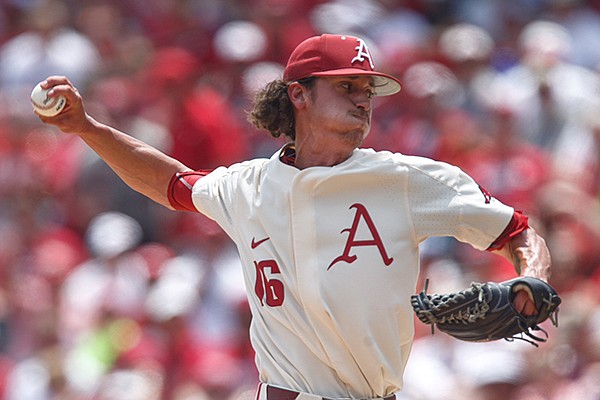 FAYETTEVILLE — Some time before the season's done, Blaine Knight might get all of his pitches working.

As Mr. T used to say, it will be time to “pity the fool” that steps to the plate against the Arkansas ace right-hander.

Knight gave up a pair of solo home runs in a solid eight innings – and just one other hit – to lead No. 6 Arkansas past Oral Roberts, 10-2, in the first round of the NCAA Fayetteville Regional on Friday at Baum Stadium.

The junior from Bryant improved to 11-0 in a 104-pitch performance that never allowed the Golden Eagles to get comfortable at the plate. Riley Keizor slammed two homers, but the four seed from Tulsa only had three other baserunners against Knight.

The top-seeded Razorbacks advance to play the winner of Southern Miss and Dallas Baptist at 7 p.m. Saturday.

Knight said he didn't have his best stuff against ORU. It's been kind of like that in about six or seven outings this season, but it's always been good enough against some of the nation's best pitchers. It's like that when you can really pitch and compete.

Knight said the location of his fast ball “was pretty shaky.” Dave Van Horn, his coach, said his ace “didn't land that slow breaker, the one that's 71, until the seventh inning.” That curve is a perfect complement to his fast ball, sometimes at 96 mph Saturday. The breaker just wasn't there Friday.

So Knight went with his slider for most of the 95-degree day, moving it around on the edges. He only recorded two strikeouts, but walked just one. There were 67 strikes and rarely did he pitch behind in the count. He got 12 outs on three or fewer pitches. There were five other outs on four pitches.

“You don't go 10-0 in (the SEC) if you don't do a lot of things well,” Folmar said. “He throws the fastball to both sides of the plate. He doesn't give you a chance to relax. It's strike after strike.

“You do what he did in that conference, he's good.”

So is Arkansas hitting star Heston Kjerstad. The SEC's Freshman of the Year slammed two homers and drove home four runs. Knight said it's exactly what he's seen from Kjerstad since he stepped on campus last fall.

And that's what everyone is saying about Knight this season. Nothing seems to faze him.

Knight said the heat didn't bother him Friday. And, it was nasty hot with high humidity, as maybe 1,500 of the 8,872 fans decided to watch from a standing position on the Baum concourse to stay in the shade.

“I just stayed hydrated and out of the sun,” Knight said.

As far as how he approached the Golden Eagles, Knight said, “They don't swing and miss much.” ORU had just five swings and misses against Knight. He gave Keizor credit for “sitting on a pitch and hammering it.” He got a first-pitch fastball in the fifth, and a slider in his next at-bat in the seventh.

Van Horn said Knight not having the breaking ball “probably cost him three or four more strikeouts. But he's got four good pitches.”

There was mention of some earlier games this season when Van Horn pulled Knight without maxing out his pitch count, turning it over to the bullpen early.

“Yeah, maybe in the sixth when he said he had another inning in him and wanted to stay,” Van Horn said. “I just would tell him we might need that later. He knew what I was talking about. We are going to get to a regional one way or another.”

Giving the Hogs eight innings saved the top end of the bullpen – Matt Cronin, Jake Reindl and Barrett Loseke – for later in the regional. Reindl did get up in the pen in the seventh inning, but not for long.

“We won't know until later in the weekend until we see how the pitching goes what Blaine's performance meant to us,” Van Horn said. “But the first day is always the hardest in the regional.”

Knight doesn't want to hear about what his performance meant to the Hogs. And, don't expect to get him on Twitter for a thumbs up. He won't be looking. Pitching coach Wes Johnson challenged him last fall to stay clear of social media all season and just pitch.

“I'm not going to (look),” Knight said. “It would make me have the big head. I'll stay off the whole season.”

Knight knows it's just about competing and pitching. Every now and then, he'll give up something, but he's coming back with a strike on the next pitch. He'll go high in next week's major league draft.

I don't expect him to buy any gold chains, but Mr. T would give him a thumbs up if he does.