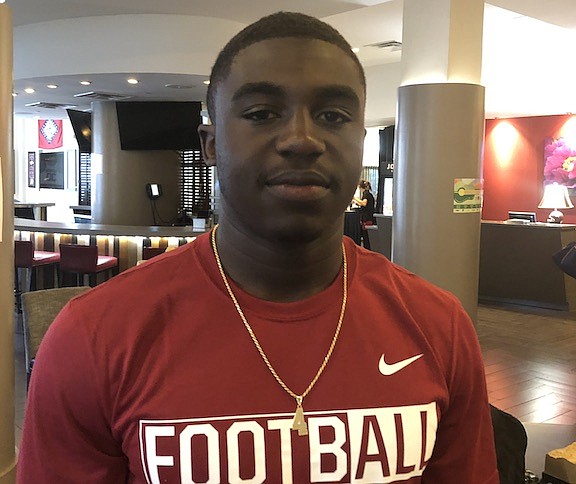 “It has definitely developed a lot,” Young said of his relationship with Traylor. “If it wasn’t for him, I wouldn’t be out here. I want to thank him for getting me out here.”

Young, who rushed 171 times for 1,700 yards and 35 touchdowns as a junior, went over the highlights of his visit.

“I think the biggest thing was the coaching staff and getting to meet them,” Young said. “They are all great guys. It definitely feels like a family feel. The players, it felt like home.”

He has no other connections with Arkansas.

The trip has Arkansas coaching staff at the top of his comfort list.

"I think I'm closer to here than anyone else,” Young said. “Northwestern would probably be second and then Michigan State. I don't talk to them as much but I'm still close."

Young said he feels like he is an all-around back.

“I feel like I can catch the ball well out of the backfield, which Coach Traylor likes to do,” Young said. “I definitely can run inside the tackles, too. I like to work on running downhill more.”

Arkansas was very clear about what it does with it running backs.

"They told me a lot,” Young said. “They actually sat down and showed me what they do. It was good to see the usage of the running backs out of the backfield. They do a lot of the same things we do in high school, so that's good."

He has two other official visits set up with summer - to Michigan State on June 8-10 and Northwestern on a date to be determined. Arkansas is in a mix of top teams for Young.

“I think it is up there in the top,” Young said. “North Carolina, Stanford, Rutgers, Northwestern and Michigan State.”

He plans to take unofficial visits to the schools closest to him so he can take more trips.

"They're a little further away and they're paying for it, so it'd be a little easier to travel out there and see everything,” Young said.

Young's older brother, Avery, is at Rutgers and he didn’t rule out the possibility of joining that program.

"I'm not sure,” Young said. “It's always a possibility. I've just got to see around and compare everything else."

He would like to have a choice made sometime this summer, but only if he feels certain about one school.

"Maybe July,” Young said. “If not, throughout the season I'll narrow it down."