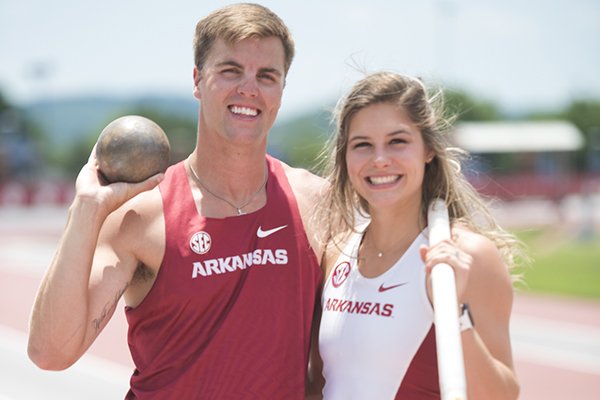 FAYETTEVILLE -- Arkansas Razorbacks senior Derek Jacobus has felt extra stress before running the 1,500 meters in the decathlon at the NCAA Outdoor Track and Field Championships the past two years at Oregon's Hayward Field.

Jacobus figures he'll feel the same way Thursday, but it's not because the 1,500 is the decathlon's final event and he's anxious about the outcome.

The decathlon 1,500 has been run at the same time as the women's pole vault the past two years, and the events will be held simultaneously again Thursday.

"They're always running the 1,500 right when we're in the middle of the vault," Lexi Jacobus said. "I get to watch Derek warm up basically.

"I don't really get to watch him much because his events are all Wednesday and Thursday, and I can't be at the track all day. I need to be resting up. So I'm at the hotel room checking on the decathlon results.

Two years ago when Lexi Weeks -- her maiden name -- won the pole vault at the NCAA Outdoor Championships, Jacobus was her boyfriend.

"The decathletes -- all of us together -- take a victory lap after the 1,500," said Jacobus, who is from Palo, Iowa. "I said, 'Hey, my girlfriend just won nationals.' This guy Solomon Simmons from Eastern Michigan said, 'Dude, that's awesome.' "

During last year's championships, Lexi and Derek Jacobus were engaged after he proposed in February 2017. Their wedding was August, so this week they're back at nationals as husband and wife for the first time.

Coaches on Arkansas' men's and women's staffs said they can't recall another example of a married couple for any school competing at the NCAA championships.

"I think it's probably extremely rare," said Travis Geopfert, an assistant for the men's team who coaches Derek Jacobus. "What I think is really cool about both of them is their maturity level and the way they handle their unique situation.

"They're both hardworking, disciplined people. They're motivated. I think they hold each other accountable off the track in terms of making sure they get enough sleep and eat healthy and all those different things that go with it.

"I think we're all fortunate to be around them. They individually and as a couple make everyone around them better. That's a pretty special thing."

Lance Harter, Arkansas' women's coach, said Lexi and Derek Jacobus have trained this year the same way they did before their marriage.

"The stresses of being married and running a household, we've never heard a negative word from them about, 'Oh gosh, we have to deal with this,' " Harter said. "It's always been very positive."

After Derek Jacobus transferred from Northern Iowa -- where as a freshman he won the Missouri Valley Conference decathlon title -- to Arkansas in the fall of 2015, he met his future wife at a party.

Jacobus said he was instantly attracted to her, but at the time she was going out with someone else.

"When she got on the market, I didn't waste any time asking her out on a date," he said.

After dating for about a year, they got engaged.

"We just knew right away, really," said Lexi Jacobus, who is from Cabot. "It didn't take us very long to figure out we wanted to be together.

"When we got married I was 20 and he had just turned 22. That's a lot younger than a lot of people are when they get married, but I just feel like when you know, you know. That's what we felt like, so we figured, why not go ahead and get married?"

"We're still in that honeymoon phase, I guess," Derek Jacobus said with a laugh. "Whenever something needs to get done at home, it gets done. No complaints.

"We grew up with good parents who taught us how to do the dishes and the laundry."

And they're no odd couple.

"We're both very tidy people," Lexi Jacobus said. "So our home is always very clean. We work well together in that aspect."

Lexi and Derek Jacobus also have maintained their high academic marks. She has a 4.0 grade-point average as a chemistry major. He graduated in May with a sports management degree and 3.7 GPA, and he will begin work on a master's degree next year.

Lexi Jacobus is a three-time NCAA champion and the pole vault national leader this season at 15 feet, 3 inches. Derek Jacobus ranks 18th nationally in the decathlon with 7,555 points at the SEC championships, where he finished fourth.

The plan had been for Derek Jacobus to redshirt outdoors this year -- he still has indoor eligibility for the heptathlon in 2019 -- but he agreed to compete at the SEC meet to try to help the Razorbacks win the title. They finished second to Alabama by 11 points.

"Unfortunately for us as a team, we had a couple things go not quite as planned and we didn't end up winning the title," Geopfert said. "But Derek did great and gave us a big shot in the arm. I can't say enough about what he did for our team."

Jacobus said he doesn't regret the decision to take off his redshirt so late in the season.

"It didn't end up like we thought it would," he said. "But I'd do it again in a heartbeat. It's all about the team."

"I don't really see myself away from the track for too long," he said. "I'd like to make a career out of it."

Lexi Jacobus has plans to go to pharmacy school after graduating, but she might put that off if she's able to pole vault professionally.

"Figuring out all that together is going to be an adventure," she said. "But I'm sure it will work out in the end."

Derek Jacobus finished 18th in the decathlon at the NCAA meet the previous two years, but he was 11th at the USA Championships last year.

Geopfert said he hopes both Lexi and Derek Jacobus earn All-American honors this week, but whatever happens, it will be a memorable experience during their first year of marriage.

"Think about the stories that they're going to tell their kids some day about competing at nationals together," Geopfert said. "I want dibs on their young ones when that time comes, too.

"I'll be making some recruiting calls to their house in the future, I'm sure."