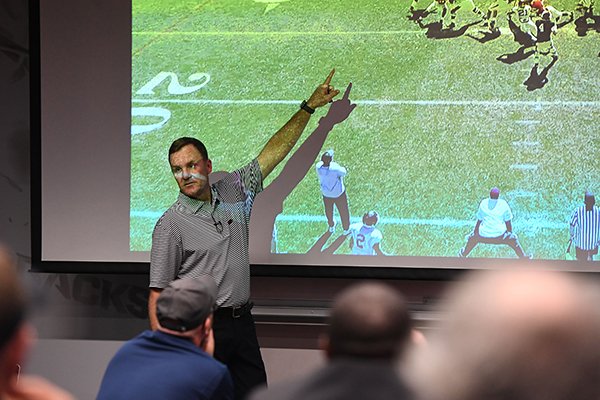 FAYETTEVILLE -- Chad Morris dropped a summer lesson on the state media Wednesday with a 45-minute primer on X's and O's and terminology in the Arkansas Razorbacks' team meeting room at the Fred Smith Center.

Morris went back to the basics to get his points across to the 40 or so assembled media members through a video-and-slide presentation, capped by a short question-and-answer session.

The presentation had the theme "Football in its Natural State," which Morris credited to Brooks Cockrell, an assistant director of football media and an Arkansas native.

"He may win a Pulitzer Prize for it," Morris said, while also pointing out the logo with partial borders of the eastern and western sides of the state, which give Arkansas a distinctive shape. "I said, 'This is brilliant.' "

Morris is thought to be the first football coach at the University of Arkansas, Fayetteville to conduct a clinic strictly for the media on the basics of how he teaches football.

"This is football 101, ground-floor level, and build you up," Morris said. "We're going to talk offense and defense, because I'm heavily involved on defense."

The 49-year-old Morris, who took the head coaching reins at a Power 5 school for the first time in December, looked much more natural in a clinic setting than he has in other media sessions, when he has often been delivering messages to recruits and fans.

"The fun is in the winning, we understand that," Morris told the media. "But fun is also in the journey and the building. We take pride in building players."

Morris started with the layout of the field, with yardage markers to the hashes, the numbers and midfield, and how they are used in alignments. He gave an example of a receiver being told to line up "on the numbers," and the player standing on top of the numerical yard-line marker near the sideline rather than at the top of the number.

He gave brief overviews of offensive and defensive calls and coverages, but he made certain to not divulge his personal offensive adjustments to certain defensive looks.

"I can't tell you those secrets," he said.

Morris has played up his background as a longtime high school coach, and his passion for explaining the game was on full display.

"It was really what can we do, and do it at a fast pace, that would give our guys an advantage," Morris said when asked about his fascination for schemes. "As far as talent-wise, I've had incredible talent running this, and I've had not-so-great talent running it. We've had success at both levels with it.

"Obviously, great players make great coaches, too. We understand that. We also understand, this as you can see, limits some things that defenses can do."

Morris talked about "Bear" defenses and over-under calls; "bouncing" men in motion; an "Okie," or odd-man defensive front; and the famous "Tampa 2" defense. He steered himself back to the basics whenever he started to get heavy on insider lingo.

Morris signed off with a shout out to Coach Dave Van Horn's baseball team, which is playing South Carolina in a best-of-three NCAA super regional series this weekend.

"Football season is right around the corner," he said. "We're excited about a great weekend. Got camps, got players coming in and out. It'll be a big weekend for us."