State of the Hogs: Eric Cole has case for Arkansas MVP 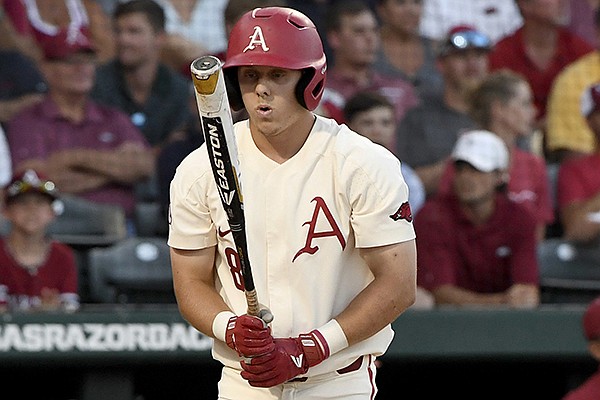 It's hard to pick a most valuable player for this Arkansas baseball team. It's a deep team that heads to Omaha for the College World Series.

Blaine Knight (12-0, 2.74 ERA) is popping up on All-America teams. He was the highest-drafted Razorback, taken in the third round and the 87th overall pick by the Orioles.

Freshmen Heston Kjerstad and Casey Martin are on All-America teams for first-year players. Kjerstad was the SEC's freshman of the year, probably edging Martin. Carson Shaddy is the All-SEC's first teamer at second base. Grant Koch and Dominic Fletcher made the All-SEC team for defense.

But if there was a vote for MVP of the Hogs, right fielder Eric Cole would garner strong consideration. Cole has batted lead-off over the second half of the season and set the table in awesome fashion.

In the non-conference slate, the junior from Southlake, Texas, dazzled. In SEC games, Cole led the SEC with 28 RBI and hit .346 with eight homers. The latter was tops on the team and he trailed only Shaddy's .395 among Hogs.

It's the second straight season for Cole to hit his stride for league games. He was drawing the ire of fans last year for hitting well below .200 but staying in the lineup when SEC play started. He hit .285 for the season, but it was .315 in SEC games, second best on the team.

Arkansas coach Dave Van Horn said then on why he left him in the lineup despite struggles, “He's one of our best players. I see him crushing it in batting practice and I know he's going to settle in soon.”

Yes, he may be the the team's best player. He was drafted in the fourth round, 122nd overall by the Royals after earning second-team All-SEC honors.

It's hard to imagine that there are three better outfielders in the SEC. He plays a great right field and gives opposing managers no easy choice in the late innings. He's a powerful switch hitter with no holes. His swing looks the same from either side, a rare sight.

“What he's got is a feel and flow to his swing,” Thompson said. “The movements from both sides are very similar and you don't see that often. Usually with a switch hitter, they look different. You can't teach that.”

There is some length to his swing and a big leg kick.

“He's on time,” Thompson said. “That's all you ask and he barrels up the ball.”

Cole has started all 63 games for the Hogs, despite battling through an ankle sprain and countless bruises on his right foot from either stray pitches or foul balls going straight down. Kjerstad is the only other Hog to start every game.

There's been many nights when Cole limped his way to the outfield between innings, but made all of the plays. He's the only UA starter without an error. He's got great speed, but it's been compromised by the foot injuries this season.

“I have worn an ankle brace most of the season,” Cole said. “It feels pretty good right now, but that's probably the adrenaline from Omaha helping out.

“Really, I don't think it's been that bad. There's a few days it has looked pretty badly (bruised). But it's nothing like Blaine (Knight) had when he pitched after taking the line drive off his shin (against Kentucky). It's been nothing that would keep me off of it.”

Van Horn thought Cole's power was perfect for the three spot in the lineup to start the season, but when Jax Biggers struggled in the lead-off through March it was time to make a move.

“Cole could hit three hole,” Van Horn said. “He's got that kind of power. But he's a good set up man for the top of the lineup.”

Cole didn't really care. He had hit lead-off as a freshman and most of last season.

“Coach asked me if I could move back,” Cole said. “It was no biggie.”

A switch hitter is ideal for that spot. It's long been in Cole's game.

“I think since I was 8 years old,” he said. “My dad said I was swinging in the cage lefty that summer. So I went the entire fall season hitting all lefty and that caught me up with my right side.

“I think some say I'm better lefty, but I think it's just that I bat more from that side. You just face more right-handed pitchers so you get more chances.”

The power numbers are slightly better from the right side, his natural swing. But that also might be because the wind blows to left more in Baum Stadium. The ball jumps that way with the south breeze.

There are strong spots throughout the Arkansas batting order, but there has been some lift at the bottom with a post-season surge from Biggers in the nine hole. Most agree that what the Hogs now have is true lead-off batters at one-two and nine with Casey Martin batting behind Cole.

“Really, we have lead-off type hitters at 9, 1 and 2,” Cole said. “That takes a lot of pressure off of me. Jax is that type of hitter.

“So with how we are going right now, I don't feel pressure to start a rally. Any of us can. No one feels like they have to be the guy.”

Van Horn said it's not that all three can hit at the top of the lineup. All three could hit in the middle of an SEC order, too.

“So he could hit in the three hole. But he's a good set up for our lineup and when you get to the second or third inning, you are going to see Biggers, Cole and Martin in a row. That's when we get things going.”

Thompson liked it when the idea came up in a staff meeting to move Cole to the top of the lineup.

“We felt like Eric was being the most consistent,” Thompson said. “He was an on-base machine. That's what you look for there and he can also drive in runs. But you want people on base for Heston, Luke (Bonfield) and Carson.”

As far as what Biggers has done of late, Thompson said, “Jax is an optimal 9-hole guy as far as on-base percentage. He kicks our lineup over. He could hit in a lot of different spots around the SEC and there probably aren't many teams with a 9-hole like him. It's been a good feeling with Jax there now.”

Cole leads the Hogs with 85 hits. Kjerstad is next with 81 and Martin has 77.

“We've seen Eric hit like that the last two falls,” Shaddy said. “To get over 80 is amazing. He's a tough out from both sides of the plate. He's a huge guy in the lead-off spot. He can put it over the fence and hits doubles, too.

“Then, you have Casey hitting second. He's a big leaguer. That's all I need to say.

“They are one-two but when you get to the end of the lineup, Jax is there like another lead-off.”

Biggers has been a terrific hitter since breaking his finger on the final weekend of the regular season.

“I think Jax has been really good since he came back from (the broken finger),” Shaddy said. “I think when you have an injury, it makes you focus a little more. Everyone remembers the Michael Jordan flu game.

“I think when you play (every day), then you go to the bench (for an injury), you realize how lucky you were. You aren't liking it having to sit on the bench and when you come back, you want to kick butt.”

Van Horn thinks Biggers is playing relaxed and perhaps with a shorter swing.

“I think (the injury) allowed him to get off to the side and see some things,” Van Horn said. “He was trying too hard. He has been swinging the bat better since coming back.”

There wasn't as much focus on hitting for power since the injury.

“I think he was trying to hit it out of the park earlier,” Van Horn said. “Since he's come back, he's focused more on going up the middle. And, you know what, there have been some power, too. That comes from a shorter stroke.”

Cole's power might surprise. At 6-0, 170 pounds he doesn't look like a masher. But he's thicker this year after 10 months in Blaine Kinsley's strength program. The new UA strength and conditioning coach has added leg strength that might figure into a school record 94 homers.

“Blaine Kinsley has helped me keep the weight on and stay strong,” Cole said. “I'm within in a couple of pounds of where I was when the season started. Look at me; I'm not a guy that should be hitting 14 home runs.”

That's why Eric Cole might be the Arkansas most valuable player.