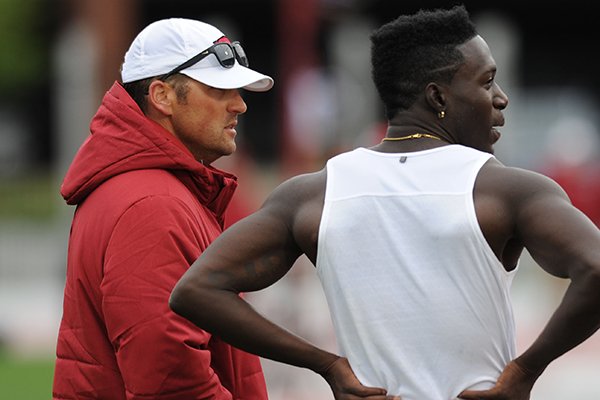 FAYETTEVILLE -- Travis Geopfert, an assistant track and field coach for the Arkansas Razorbacks' men's team the last nine years, is leaving the program but staying in the SEC.

Geopfert has accepted a job to be Tennessee's associate head coach. He will be coaching field events and the heptathlon and decathlon for Tennessee's men and women -- the same responsibilities he had with the Razorbacks' men's team.

"It's a great opportunity professionally, but it's certainly difficult to leave this place," Geopfert said. "The affection that we have for Arkansas and the Razorbacks is immense.

"It's been an amazing nine years. We've loved it."

Geopfert was part of University of Arkansas, Fayetteville teams that won 10 SEC titles in indoor and outdoor track and field and the 2013 NCAA indoor championship.

In 2013 and 2014 Geopfert was named by the U.S. Track and Field and Cross Country Coaches Association as the national assistant coach of the year indoors.

"He did a great job for us here and he's going to be missed, no question about that," Razorbacks Coach Chris Bucknam said. "But we're going to move on and hire another great coach."

"Buck and Case, I love those guys," Geopfert said. "I can't express enough the appreciation I have for them in helping me develop as a person and as a coach.

"The friendships aren't only between us, but between our families. These are relationships that my family is going to cherish forever."

Geopfert will be working with Beth Alford-Sullivan, Tennessee's director of cross country and track and field for the men's and women's programs.

"I'm excited to get after it," Geopfert said. "I'm looking forward to the challenge."

Geopfert will return to Fayetteville in 2019 when Arkansas hosts the SEC indoor and outdoor championships.

"It's going to be weird walking into this place with Tennessee, because this has been home," he said. "But that's OK. Change can be good for everyone."

Geopfert said Tennessee contacted him about its staff opening.

"They were pretty aggressive in coming after me," he said. "You don't see these things coming, but sometimes when opportunities present themselves you have to be prepared to make hard decisions and take advantage of them."

Bucknam said Arkansas will have a national search to replace Geopfert.

"You know some out there you hope express interest in the job, but there might be some out there that we haven't thought of, either," Bucknam said. " We'll open it up and see what happens."