State of the Hogs: Snacks set up big Arkansas inning in Omaha 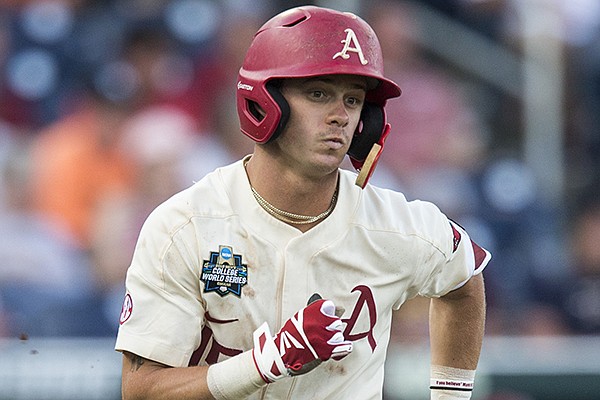 Arkansas third baseman Casey Martin runs toward first base after hitting an RBI single during the sixth inning of a College World Series game against Texas on Sunday, June 17, 2018, in Fayetteville.

OMAHA, Neb. — Members of the 1979 Arkansas team attended the 13-4 thumping of Texas at Baum Stadium on March 13. Enjoyable, they said to a man.

But when asked if it was impressive, Kevin McReynolds, one of the all-time great players at Arkansas, noted that it “was not” vintage Texas.

The Longhorns lost the next night, 7-5, limping out of Fayetteville at 9-9. There was a turnaround soon afterward and the Texas team the Hogs saw in the College World Series on Sunday had won 33 of its last 45 games.

Arkansas coach Dave Van Horn commented last week, “Texas is much improved since we saw them, but so is our team.”

Always the straight shooter, Van Horn hit the bullseye. The Razorbacks crushed the Longhorns, 11-5, Sunday in Omaha to make it three straight over the Big 12 Conference champs.

The Razorbacks did it in style, too. They put up eight runs in the sixth inning, six of which came after a two-hour, 49-minute rain delay.

They believe the key was what they did during the rain delay, a lesson learned between games of a doubleheader against Kent State the weekend before Texas came to town in March. The Hogs lost the second game against Kent State, 10-4, after eating a bunch of sandwiches.

Van Horn told his team the next day that Kent State only had candy bars before whipping the Hogs in the second game. The message still resonates. Don't ever get a full stomach during a break.

“We turned away the sandwiches in our rain delay today,” said Dominic Fletcher, who delivered a two-run single in the big sixth inning.

“We know this: Texas ate two trays of sandwiches in the rain delay today. They brought us the same stuff. We sent it back.”

“We heard Texas ate them,” he said. “All we ate was Snickers. That's all we wanted. We remembered what Coach told us. We aren't going to get full.

“We ate those Snickers and a few bananas.”

Van Horn said the Hogs knew exactly how to handle themselves during the delay.

“Once we realized it was going to be at least an hour and a half, just talking with all the

officials out there, we came up into the locker room and they're air conditioned, they're laying around, goofing around,” Van Horn said. “Eating some snacks and that kind of stuff.

"And I just don't want them eating too much....The running joke after that was you're going to get a banana and a Snickers. When I walked in (during the Texas game) that tray full of food.

“They get it. Like Luke (Bonfield) said, we didn't want to be sluggish. But it was nice for them to bring up the food, cheese and crackers and bread and stuff. Slowly disappeared a little bit."

Casey Martin delivered an RBI single to left field to get the Hogs going after the rain delay. Martin, the freshman third baseman from Lonoke, said there was a lot of preparation during the rain delay.

“I hit in the cage back inside several times,” he said. “And, I had some candy bars.

“Carson Shaddy helped me. He went over the approach to take in that first at-bat a couple of times. We kept going over it. He's helped me all year about approach.

“I was pretty loose for most of that break, but I started getting nervous at one point, real jitters. I was excited to get back out there.”

Part of that was the stage, the College World Series. And, there was also knowledge that it was a big game against a hated rival, the Longhorns.

“I grew up in Arkansas knowing what Texas means to everyone,” Martin said. “I was taught the downward hook 'em sign. I don't mean that with disrespect, just what I was taught. You don't forget it. That's my upbringing.”

Shaddy said the talk with Martin was similar to what they've done all season. Shaddy goes over the pitching strengths and the right approach.

“I went to him several times during the break,” Shaddy said. “My dad told me, 'If you think something needs to be said, go do it.' What he emphasized to me is that if you don't say something, then maybe later you will regret it. You will feel terrible later if you don't.'

“So I when I thought of what I wanted to tell him, I went to him.

“I knew that first at-bat after the rain delay was a really important at bat. I wanted to go over approach one more time, then I did it again.

“What we talked about was how they were going to pitch him. I told him don't chase a pitch, hunt it. And, that first pitch was a slider up and he got it.

“I'm glad he let me help him. He's done that all year, listened to me.”

Van Horn said Martin's was the approach that fit the situation.

“I just wanted him to be aggressive,” Van Horn said. “I didn't want it to go deep in the count.”

Jared Gates, who had three hits, said the Hogs just fed off Martin's hit, which was followed by a single by Heston Kjerstad, Bonfield's hit by pitch and Fletcher's single.

“I think Casey sent a message, then the rest of us just kept it going,” Gates said. “That first at-bat was big. We came out firing after the delay. Those were two great ABs by the freshmen.”

Koch said it was a good feeling to see the freshmen deliver.

“Really, those guys have delivered all year,” Koch said. “That's two of our best hitters coming up after the delay. That's who we want in there.”

“That was the swing of the game,” Van Horn said. “Obviously, then we followed it up with the big inning after the delay.”

Bonfield said it was a sinker that didn't sink.

“You don't know in this stadium, with the wind blowing in,” Bonfield said. “You just don't know.”

There was no doubt after the Hogs hammered away in the sixth. Bonfield said the key was to stay loose during the delay.

“The guys did a really good job of just staying loose, not trying to, I guess, sometimes with rain delays you can, like, get a little lethargic after them,” he said. “And we kind of stayed loose, didn't eat a ton, and took some swings in the cages down there and came out.

“And we put up, I think, like, eight on the board after the rain delay. So it was awesome.”

That's putting it mildly. It's kind of like when some of the old timers agreed that it wasn't vintage Texas in March.

It's still the College World Series. Beating the Longhorns is still sweet.