College World Series a homecoming of sorts for Jared Gates 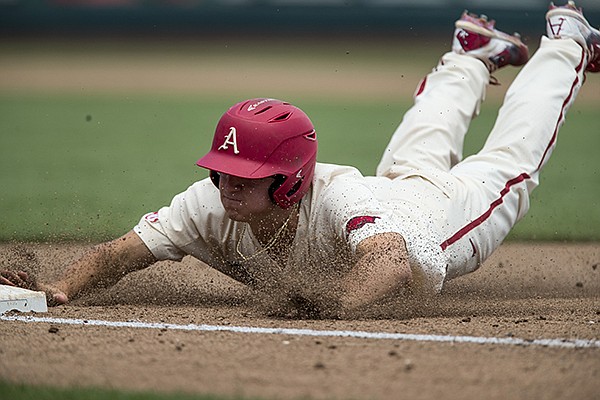 Arkansas' Jared Gates slides into third base during a College World Series game against Texas on Sunday, June 17, 2018, in Omaha, Neb.

OMAHA, Neb. — Jared Gates is ending his college career in the same area it began.

As a sophomore, Gates helped lead Iowa Western to the final four of the JUCO World Series and earned second-team All-America with a .434 average, 8 home runs and 61 RBI.

"This has always been my goal to get back over here and revisit this place," said Gates, who attended College World Series games while in junior college in 2015 and 2016. "I went and talked with (Iowa Western coach Marc) Rardin the other day and had a two-hour conversation with him, so it's good to be back."

Gates' first game at the College World Series was successful Sunday. He had hits in his first three at-bats and scored a run in the Razorbacks' 11-5 win over Texas.

"I really wasn't nervous, to be honest with you; I was excited," Gates said. "It's definitely the biggest stage I've played on, but I've played in a lot of games here at the University of Arkansas and I played in the JUCO World Series my freshman and sophomore years.

"The first hit was cool for me to get it out of the way."

It continued a postseason hot streak for Gates, who since the beginning of the SEC Tournament nearly four weeks ago has batted .387 with 2 home runs and 6 RBI. Those numbers, coupled with his success in the NCAA regional last season, has earned him the nickname "Mr. June" from his teammates.

"He's been huge," Arkansas coach Dave Van Horn said. "That's the guy who has helped lengthen our lineup. He's an incredibly tough out and very confident. He brings a lot of defense to first base and just a lot of toughness.

"We probably wouldn't be here without him. The guy has gotten big hit after big hit, started rallies, and even though he's not a runner, he's scored some runs for us and has been huge."

Gates is healthy after a mid-season hamstring injury that forced him to miss some playing time. He also missed significant time with a broken hand in 2017.

"It's hard to say" whether those injuries contributed to slow starts both seasons, Gates said. "I'm not one to make excuses for starting slow and having a bad year, but it definitely helps when you're healthy and get some at-bats and get in a groove."

It's a bonus to play in familiar surroundings.

"He's very familiar with this tournament, having been to it and seeing some friends play in it," Van Horn said. "I'm just glad he's getting this experience."