'It's like a big train': Diamond Hogs ride big innings in postseason blowouts 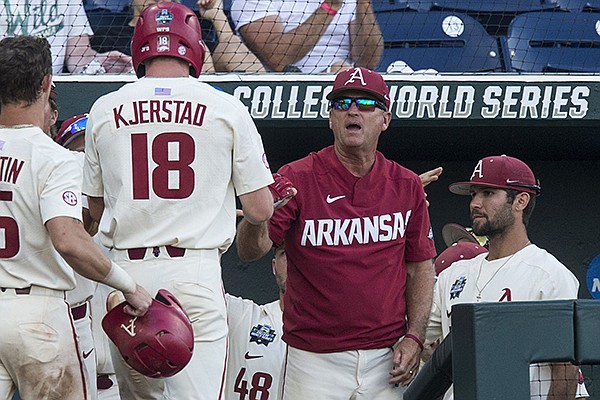 Arkansas coach Dave Van Horn greets Heston Kjerstad (18) after he scored a run during the sixth inning of a College World Series game against Texas on Sunday, June 17, 2018, in Omaha, Neb.

The Razorbacks have scored at least four runs in an inning seven times this postseason, spanning 10 games at the SEC Tournament and in the NCAA Tournament. Arkansas is 8-2 in postseason games and has an average win margin of 6.3 runs.

"We've put together some really big innings and at this time of the year that's really hard to do with the pitching you're facing," Arkansas coach Dave Van Horn said. "I kind of kid our coaches that we deserve it. If you go back and look at all the one- and two- and three-run games we've played throughout the year, I bet there were 30 of them. It's nice to be on the winning side and win by four or five runs, and go into the eighth or ninth inning feeling like you're in pretty good shape and not having to sweat it."

The big inning for Arkansas against Texas on Sunday came in the sixth when the Razorbacks scored eight runs. Arkansas' first 10 batters reached base in the inning, the most since 12 straight reached during the first inning of a 32-8 win over Saint Louis in April 2010.

Five straight batters reached by single or walk before a weather delay postponed the game by 2 hours, 49 minutes. When play resumed, the next five reached with four singles and a hit-by-pitch.

"It's just like a knockout punch. We feel it," Arkansas pitching coach Wes Johnson said of the big innings. "We were in that locker room and as coaches you don't want to say anything, but we're like, 'Man, we're about to blow this open when we come back.'"

The eight-run inning was Arkansas' biggest this postseason, topping a seven-run second inning in a 10-2 win over Southern Miss in the regional round. The Razorbacks also had a pair of five-run innings last Monday in a 14-4 win over South Carolina in the decisive game of the Fayetteville Super Regional.

"That just shows the momentum we get from one guy getting a hit to the next guy," third baseman Casey Martin said. "It's like a big train."

"When it gets going, it's hard to stop," first baseman Jared Gates said.

Arkansas batted .384 against the Longhorns, racking up 15 hits in 39 at-bats. The Razorbacks had at least one hit each inning.

While hitting is important, Van Horn said the big innings wouldn't be possible without some combination of drawing walks, working pitch counts, benefitting from errors and good base running. The Razorbacks have been aggressive on the base pads this postseason with several first-to-third moves on singles and second-to-third sacrifice flies. Not only has it moved runners into scoring position, but it has also forced quick throws that have resulted in errors.

"Coach Van Horn, what he's done with our offense has been phenomenal," Johnson said. "There is more to baseball than hitting; it's about an offense - running, getting first-to-third. If you look at our base running in the second half of the season, it has been really good, whereas in the first half that wasn't one of our strengths."

Arkansas has been on the opposite end of some knockout innings this season, such as South Carolina's five-run fifth in Game 2 of the Fayetteville Super Regional last week or Florida's six-run third in a win earlier this year. It gives the Razorbacks an appreciation for what they are doing to their opposition.

"We've talked about it as a staff because it's tough man; we know how they feel," Johnson said. "You're just going, 'OK, this is over. We can't stop them.'