Barford: 'I think I'm a sleeper' in NBA Draft 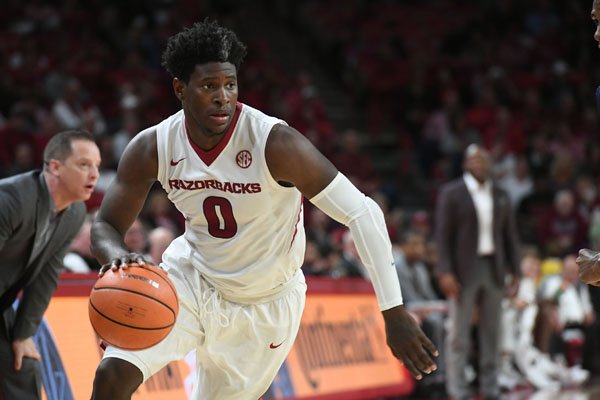 Arkansas guard Jaylen Barford drives to the basket during a game against Oral Roberts on Tuesday, Dec. 19, 2017, in Fayetteville.

FAYETTEVILLE — The last couple of months have been long, but productive for former Arkansas guard Jaylen Barford.

The 6-3 guard starred in front of representatives from each NBA franchise at the Portsmouth Invitational in mid-April and earned MVP honors after averaging 19.3 points over three games and shooting 38 percent from 3-point range.

Days later, Barford became the first Arkansas player to be invited to the NBA Draft Combine since Bobby Portis and Michael Qualls in 2015.

As the draft approaches (6 p.m. tonight on ESPN), Barford is hopeful a team will take a chance on him. He plans to watch the draft with his family in Tennessee.

“In this whole draft class, I think I’m a sleeper,” Barford told WholeHogSports. “I’ve got great confidence in my game and I’ve been working hard my whole life for this moment. I’ve worked hard in all my workouts and tried to outperform anybody that’s in front of me and play with that killer and dog mentality in me.

“I’ve been getting some good feedback. Teams like me,” he added. “They like my size, my body and my ability to score and play defense."

Barford was in Portland on Tuesday and had the opportunity to meet Damian Lillard, a three-time All-Star who he models his game after, as well as former Vanderbilt star Wade Baldwin, the 17th overall pick in the 2016 draft.

In a comment to WholeHogSports, Sam Vecenie, who covers the NBA Draft, college basketball and the NBA for The Athletic, labeled Barford “a solid player” and said “it wouldn’t be wild to see him get drafted.”

Vecenie expects Barford to be on the radar for teams at Summer League to look at as either a training camp guy or even a potential two-way contract candidate.

“Big question with him is overall athleticism for a guy who will probably have to play as a lead guard,” wrote Vecenie, who has Barford No. 79 on his list of Top 100 draft prospects, “but he'll certainly get a chance.”

Barford increased his chances of landing on an NBA roster immensely during his senior season at Arkansas. His Year 1 to Year 2 jump from the perimeter – 27 percent on 3FG in 2016-17, 43 percent in 2017-18 – was arguably the biggest surprise of the Razorbacks’ season on the offensive end.

Couple an improved outside shot with a strong frame and his in-air acrobatics around the rim and it’s not difficult to understand why franchises are interested.

“(Last season) showed that I can score on all three levels,” Barford said. “I’m very efficient from the field and the 3-point line and playing different roles, like coming off pin-downs, spotting up.

“I’ve always been able to create for myself, but it’s about showing I can do other things – rebound, assist and everything. I think my senior year helped me a lot, and the coaching did, too.”

Todd Day, Arkansas’ all-time leading scorer, said last month that the NBA will open up Barford’s game even more. Day is a fan of Barford’s work off the dribble and believes his upper-body strength gives him an edge over a number of other players at his position.

“He can really get to the rack,” Day said. “He’s big enough and strong enough to finish in the paint. … One thing about the NBA is it’s all about scoring these days. They don’t really look at your size and things like that anymore.

“If you’re able to put the ball in the hole you’ll get signed.”

Entering draft day, Barford sits at No. 64 on NBADraft.net’s Big Board and No. 59 on CBSSports.com college basketball/NBA writer Reid Forgrave’s Big Board.

“It’s a big day coming soon, so I think I’ve got a 50-50 chance of getting drafted,” Barford said. “I’m pretty excited. I think everybody around me is excited.”