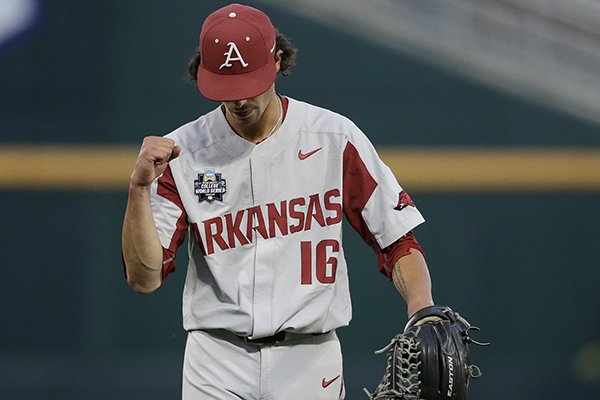 Arkansas pitcher Blaine Knight (16) pumps his fist as he walks off the mound after the sixth inning of Game 1 of the NCAA College World Series baseball finals between Oregon State and Arkansas in Omaha, Neb., Tuesday, June 26, 2018. (AP Photo/Nati Harnik)

OMAHA — One of the best Arkansas baseball players ever said it Monday before rain took away a perceived Arkansas advantage: more time off than Oregon State.

You need a little luck, said Kevin McReynolds, thinking back to 1979 when the Razorbacks scorched perhaps 10 line-drive outs in a 2-1 loss to Cal State Fullerton in the College World Series championship game.

There were some strange plays that only can be attributed to good fortune as Arkansas defeated Oregon State 4-1 Tuesday night. The victory put the Hogs one victory away from their first national title and two chances to get it.

That's where the Hogs were in 1979 when they entered the finals undefeated and Cal State Fullerton had one loss. The Hogs couldn't get that last victory despite saving better pitching for the last game.

Oregon State's problems were mostly self-inflicted. There were walks and errors to help the Hogs. And, there were two decisions by umpires that probably erased runs the Beavers appeared to have scored.

One came on an interference call at second base that resulted in a double play and sent a runner back to third. Later the Beavers probably lost a run when a foul ball call was reversed and ruled a single. The batter would have easily made second and a runner on first probably would have scored. The Hogs got out of both situations with an out in the next at-bat.

“That's baseball,” said Jax Biggers, the shortstop involved in the interference call. “You can go 3-for-3 one night and never hit the ball hard. You can smash all line drives and they be all outs.”

Center fielder Dominic Fletcher said, “Sometimes the ball rolls your way. That's big. But, I think we also did things to win the game, like taking our walks, taking a patient approach at the plate. We are known for hitting the home run, but we can win other ways with pitching and defense.”

Arkansas coach Dave Van Horn opened his media session with a clear reference to good fortune. He came back to it later.

"Yeah, like I told you, I feel fortunate to win the game," Van Horn said. "Baseball is a little different game sometimes, and you have eight innings where you don't do much and you put together one inning and you pitch good enough and play defense, you can win. That's kind of what went on tonight. Anytime you can win a game when you get out-hit almost double, you feel pretty good about it."

The interference call at second all happened because Biggers decided to pump before throwing to first with the runner deciding not to slide. He said it wasn't intentional.

“The bag at first was open,” Biggers said. “I couldn't throw. I was waiting for someone to get there and I pumped it. That started everything in motion for the interference.”

Second baseman Carson Shaddy was racing to cover first and crashed into two teammates, but held the ball.

“I think Jax's pump fake did it,” Shaddy said. “You need a little luck for sure.

“But what I saw was that we sucked up every play on the defensive side tonight.

“The game started with Nick Madrigal smoking one that Jax went to his right to pick. It was as good of a pick on a hot shot as you'll ever see. And, we just kept making plays.”

Indeed, there were other gems later. First baseman Jared Gates dove head-long onto the warning track in foul ground for an out. Left fielder Heston Kjerstad gunned down a runner at second trying to stretch a single in the seventh.

“I always think I've got the better arm,” Fletcher said, “but Heston is gunning. That was a hose. I don't know what the guy was thinking because Heston had him all the way.”

The Hogs scored their four runs on just five hits. They drew seven walks and also reached twice on hit by pitch.

Shaddy said the key was not to chase borderline pitches.

"That's what both their pitchers were trying to do, just nibble," Shaddy said. "You have to maintain a good approach. We had some good at bats in the second to push (Luke) Heimlich's pitch count up. That was the plan. You can't go out of the zone because that's what he was trying to get you to do."

Conversely, Arkansas gave up only one free pass, by starter Blaine Knight. The lanky Knight (14-0) set the single-season record for wins at Arkansas. He drew special praise from pitching coach Wes Johnson.

“Blaine goes down as the best competitor I've ever coached,” Johnson said. “He is the ultimate competitor.”

Johnson said the plan against Oregon State's terrific offense was to attack with the fastball. It was a switch in approaches for Knight over the last month when there was no command with his fastball.

“If you've watched the last four games with Blaine, he's gotten them out with his curve ball,” Johnson said. “He had gotten away from that fastball.

“I told him he had to get back to that fastball and throw it for strikes. He did that tonight. We wanted to attack those top hitters and he did that.”

Knight fed the Beavers a steady diet of fastballs in the early innings. Asked if that was what Johnson was calling, he smiled.

“That was just me and (catcher) Grant Koch tonight,” Knight said. “Coach turned it over to us. It was a lot of fastballs. I challenged their hitters. I wanted to make a statement early with the fastball and I think I did.”

There were some middle inning jams, but Knight sailed along with tough pitches in tight situations.

“He really did,” Johnson said. “He slowed down and was patient out there. That was our plan.

“Oregon State is a fastbreak offense. You can't let them get going. You have to slow down and slow them down. That's what Blaine did.

“We talked about that. Our job was to slow them down in those situations, slow the game down. Blaine did that.”

"I mean, first off, I think it's his competitive nature," Koch said. "He never gives an inch on the mound. He's thrown any pitch in any situation, and obviously has amazing stuff.

"Obviously the talent is there, but what separates Blaine is his mentality, his work ethic. So many things go into it. He's absolutely one of the best pitchers I've ever seen and I've ever caught.

"But I think it's his mindset that sets him apart from a lot of people. You want that guy on the mound and you're going to fight for that guy on defense. We know that's what the team feels, and we know he's going to give us a quality start no matter what, so it's huge."

Johnson wasn't sure Knight was going to roll to an undefeated season, but there was a prediction from Vanderbilt coach Tim Corbin that turned out to be true.

“I talked to Tim back in the summer when Blaine didn't sign,” Johnson said. “Tim said if Blaine comes back he might be the best pitcher in the country. That's what he's been for us. He's gone against all of the great ones all year and no one has beaten him yet.

“I'm proud of Blaine. What I've seen is a maturation. He's developed into a heckuva pitcher.”

Told all of that, Knight just said, “That's a great compliment and I appreciate it. But as far as what he said about competing, that's just what I do. It's what I try to do anyway.”

Clearly, the plan was to challenge and compete against Oregon State's top hitter, second baseman Nick Madrigal. The fourth overall pick in the draft, Madrigal entered with a .397 average and went 0-for-4.

“I think what you can't do against those guys and him is to nibble,” Johnson said. “So we wanted to go right after him. We still got to win one more game, so I don't want to say too much.”

Knight doesn't have to face Madrigal again and won't have to hear any trash talk from the top OSU hitter. There was some Tuesday night.

“Yeah, he hit one pretty good (to Shaddy),” Knight said, “and when he came back by me, he said, 'You got lucky.' I heard him. I just kept going at him. That was our plan.”

The Hogs need their luck to hold up for one more victory. The key in baseball is to be partly good. The Razorbacks are partly that, but they will take good luck in Omaha every time.

To a man, the Arkansas players know it's just one victory. They need two.

"Coach Van Horn told us right after the game to have that sense of urgency tomorrow," Johnson said.

Koch said it was a message heard loud and clear, but it was not necessary.

"Yeah, after the game," Koch said, "Coach's immediate message was we have a lot of work to do and there's a lot of unfinished business, and we've got to come out tomorrow with a sense of urgency for sure. That was the message, and I think we all - he didn't even really have to say it.

"We all know that our season could end at any point, could end in two days. We all know that. We're just fighting for one more day, one more game with our guys, so we're definitely going to come out with a sense of urgency tomorrow."

Van Horn liked what he heard from his captain.

"And take it to them. Don't wait for something to happen. Don't lay around in bed tonight thinking, 'Oh, one more game,' because that game will never happen if you think like that. You've just got to come play. These guys are in a good place mentally. It's not life or death. I've told them that three times this week: it's just baseball."