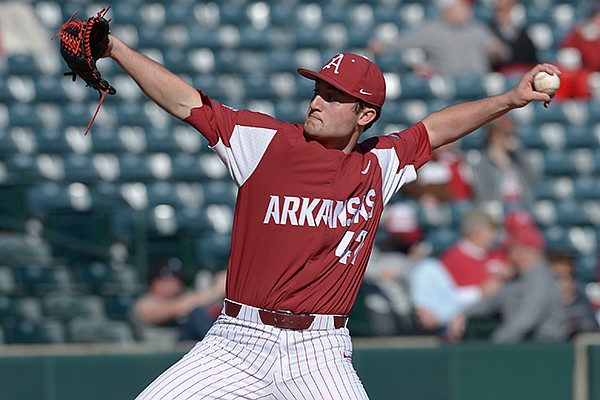 Arkansas pitcher Hunter Milligan throws a pitch during a game against Dayton on Thursday, March 1, 2018, in Fayetteville.

Ramage worked out of a two-on, one-out situation to preserve the shutout.

The Razorbacks (7-2) had 11 hits in the win and will move on to a three-game series with visiting USC this weekend that will begin Friday at 3 p.m.

Carson Shaddy's triple and Casey Optiz' single has the Razorbacks in double figures for the second day in a row.

Ramage actually knocked in a run with a single to left.

The Razorbacks added a pair of runs in the seventh a hit, a catcher's interference and two wild pitches - one on which Eric Cole scored from second base.

Cole Rampage becomes the third straight freshmen pitcher for Arkansas today and the fifth straight in this two-game series.

Bonin has not allowed a hit in his five innings of relief while fanning sixth, walking one and hitting a batter.

Razorback pitcher Bryce Bonin has now retired 12 of the 13 batters he has faced in four innings of hitless work. He has four strikeouts and one walk and has thrown 44 pitches, 28 of them strikes.

Luke Bonfield followed with a double and was chased home on Jared Gates' RBI single before the inning ended.

Jared Gates' second homer of the season was a one-out solo blast that pushed Arkansas ahead by a trio of runs.

After Casey Opitz singled and Jack Kenley walked to open the half inning for the Razorbacks, Casey Martin got the scoring started with an RBI single. Heston Kjerstad pushed it to 2-0 with a sacrifice fly later in the inning.

Arkansas' Luke Bonfield walks to lead off the bottom of the second, but is stranded at third. Still scoreless headed into the third against Dayton.

Bryce Bonin took over the mound in the top of the third for fellow freshmen pitcher Hunter Milligan.

Milligan finishes his day allowing two hits, walking one and fanning four in 37 pitches, 23 for strikes.

After Dayton starter Austin Cline (0-2, 15.00) ERA pitched a 1-2-3 frame, Milligan worked around a single and a hit batter to pitch another scoreless frame.

Arkansas freshman starting pitcher Hunter Milligan (0-0, 0.00) fans the first two batters he faces before giving up a hit, walking a batter and getting out of the inning with fly to center.