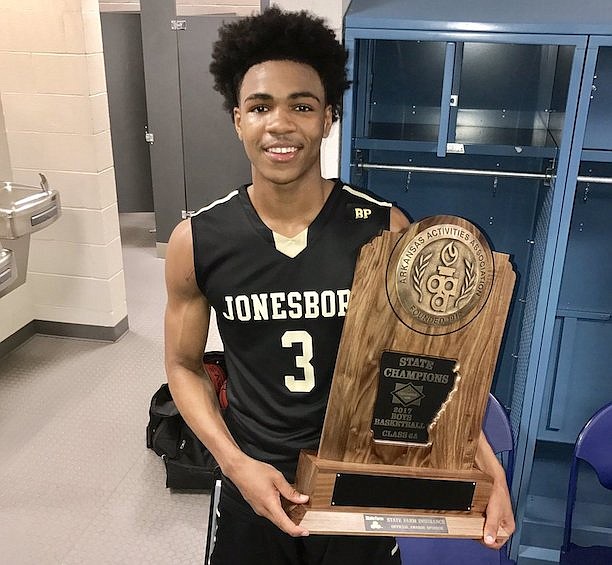 WEST MEMPHIS — Arkansas signee Desi Sills got a technical and a seat on the bench in the first half, learned a life lesson at halftime and then put on a show after intermission.

Sills (6-2, 180 pounds) scored 18 of his game-high 22 points in the final two quarters to lead Jonesboro over Pine Bluff 65-48 in a Class 6A semifinal Saturday afternoon at Lehr Arena in West Memphis.

“Des is an emotional player and wears his feelings on his sleeve,” Jonesboro coach Wes Swift said. “You always get the best of him. He went up to the coach and apologized after the game. It’s just one of those deals, you make a mistake, we move on and he was fantastic in the second half.”

Sills got the technical three minutes into the game after making a 3-pointer for saying something to the Zebras’ bench. He accepted the blame.

“It was my fault for being a butthole,” Sills said of the technical. “But I had a talk with Coach at halftime and he told me to keep my head up and respond and be Desi Sills and that’s what I did.”

The win kept alive a quest for back-to-back state titles for the Hurricane (25-5), who went 32-0 while taking the crown last season.

Jonesboro will play either West Memphis or Little Rock Hall in the championship game next week in Hot Springs. The time and day will be announced Sunday.

“It was a lot of hard work to get back to the championship game,” Sills said.

Sills, who has averaged around 18 points this season, is one of six Arkansas signees in the 2018 class. All three in-state signees will all be playing for state titles next week - Sills, Fort Smith Northside’s Isaiah Joe (6-4, 170) and Little Rock Parkview’s Ethan Henderson (6-9, 190).

All three have been long-time teammates for the Arkansas Hawks and will be playing for head coach Mike Anderson’s Razorbacks next season.

“We have been playing together since the sixth grade when I came over and we started playing together,” Sills said. “…It’s going to be a wonderful feeling. Me and Isaiah Joe both won last year and Ethan lost, but we all wanted to do it again.

“We all want to win it again and then head to the Hill where we all have chemistry and we are coming in ready to play as freshmen.”

Swift thinks Arkansas is getting a hard-nosed player in Sills who will fit right in.

“I hate to say a warrior, but that is what he is,” Swift said. “That’s an overused term because there are not a lot of people like that. He is going to come at you from the offensive end and he is coming downhill and he can finish. You have seen him finish over guys on the AAU circuit that are 6-9, 6-10 and 6-11 and he is not scared of anybody.

“His percentage doesn’t show it, but he has really worked on his shot and I think he is going to end up being a 35 percent-plus 3-point shooter up at the University of Arkansas.

“Defensively, he just likes to get after it. With Coach Anderson’s style where they kind of feed off of energy and ball pressure…He’s great with both.”

Swift said he doesn’t put Sills on the other team’s best offensive player until after halftime.

“At the University of Arkansas, especially his freshman year, Coach Anderson ain’t going to care about his fouls so when he puts him into the game," Swift said, "he is going to want him to be a dog and I think that is what they are going to get.”

“Des knows he made a mistake, but I thought his mistake really kind of flipped the game for a little bit,” Swift said. “But to his credit, he stayed on the bench and stayed into the game and stayed a good teammate.

“Our other guys got down five, but were able to flip it again with Des sitting on the bench as we go down five to up five there at halftime. I think it gave them (his teammates) that, ‘Hey, we can do this.’