Morrilton's Criswell ready to put on pads at Arkansas practice 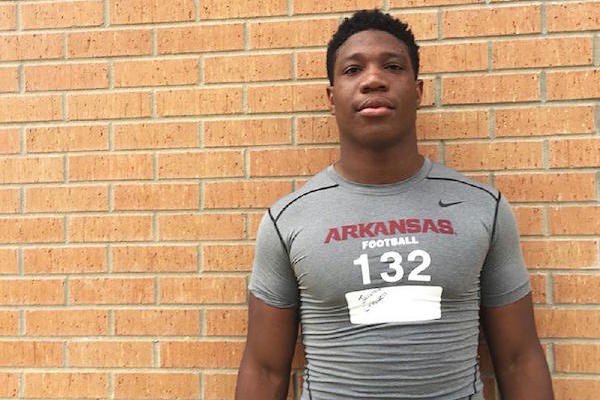 “Loved the atmosphere,” Criswell said. “Even though I wasn’t playing, it made me want to get in. I would say it’s mainly the energy the coaches bring.”

Criswell, 6-1, 205 pounds, has a scholarship offer from Arkansas State and a host of other programs showing interest. He plans to attend camps at Texas, Memphis, Florida and Ohio State and visit Colorado, Arkansas State, South Alabama and SMU.

He and offensive corodinator Joe Craddock discussed where he stood with the Hogs.

“Coach Craddock said he liked my film and that I need to come to their quarterback camp,” Criswell said. “Coach Lunney and him said they will come watch me throw a little.”

Criswell completed 126 of 211 passes for 1,947 yards and 20 touchdowns while throwing only 4 interceptions as a sophomore. He also rushed for 969 yards and 14 touchdowns on 146 carries.

Former Razorback and NFL quarterback Clint Stoerner has worked with Criswell a few times and is high on his ability.

“The arm action is elite,” Stoerner said in an October 2017 interview. “Like big-time, next level. Some of the best I’ve ever seen type stuff. When you see his arm action, you just go, 'Gosh damn, that’s special.'”

“He said coach Morris is a great guy,” Criswell said. “He’s not all up on you. He tells you one time to do something, and he trusts you to do the right thing at all times.”