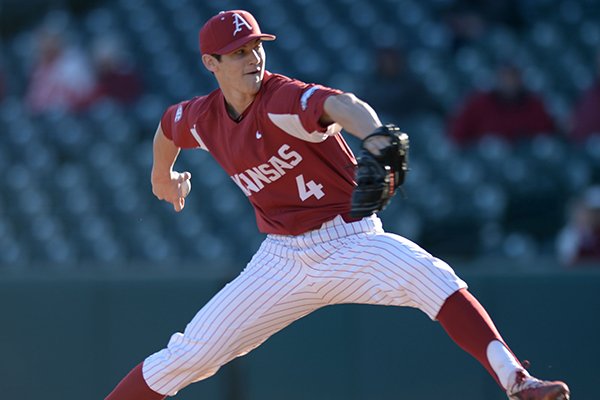 Arkansas reliever Bryce Bonnin delivers to the plate against Dayton Thursday, March 1, 2018, during the sixth inning at Baum Stadium in Fayetteville.

FAYETTEVILLE — Arkansas coach Dave Van Horn checked the weekend forecast a couple of days ago and envisioned a change of plans for this weekend's series against Kent State.

The Razorbacks and Golden Flashes will play two games on Friday beginning at 3 p.m. and close the three-game set on Sunday with first pitch set for 1 p.m.

But the schedule isn't the only thing changing for the No. 7 Razorbacks (9-3). Van Horn also has made a change to the rotation, with freshman right-hander Bryce Bonnin set to make his first start Sunday.

Bonnin, rated the No. 74 prospect in the 2017 MLB Draft by Baseball America, consistently reaches 93-95 mph on his fastball. He was clocked at 97 mph in the fall.

Bonnin is deserving of a starting nod this weekend, Van Horn said. The freshman is 1-0 in three appearances this season, and has allowed just one hit and a pair of unearned runs in 6.1 innings of work. Opponents are hitting .048 against him.

"He threw great last weekend, and he's had a couple of good outings after just an OK outing outing in California," Van Horn said. "We need to see what he can do as a starter.

"We feel like we need to give him that opportunity, and if you look at his numbers he's earned it."

Bonnin is Arkansas' fourth Sunday starter in four weeks. He replaces Kacey Murphy (1-0, 0.00 ERA), who could pitch this weekend, Van Horn said, but also could be held for the Razorbacks' Tuesday game against Texas.

"If we need to pitch Murphy, we'll pitch him," Van Horn said. "We're going to do what we need to win the ballgames. If it's a critical situation, we'll bring him in for an inning or a hitter, or whatever we need to do."

Campbell says he isn't concerned about having one fewer day to prepare for a Kent State lineup that has some power bats but is known more for its speed on the base paths.

"Other than that it's just going to be the same thing," Campbell added. "(It will be the) same preparation I do before the game just one day earlier. ... They have five guys that can run."

Fletcher and Shaddy were a combined 1-for-13 in the first two games - a 4-0 win on Friday and 3-1 loss on Saturday - against the Trojans with four strikeouts. Van Horn opted to shuffle his outfield last Sunday, inserting Luke Bonfield in left field, moving Heston Kjerstad from left to right and Eric Cole from right to center.

"Those guys needed to sit down and slow the game down in their mind a little bit and realize it's just baseball," Van Horn said. "Sometimes you start wondering a little bit if you can play or hit. We all know they can and they know they can. I think they're going to be ready to go tomorrow."

Earlier this week, Van Horn said he would give his club's play a B-minus through 12 games. He's positive it will continually improve as the schedule rolls on and the weather warms this spring.

"This is going to be a good challenge, a good series," Van Horn said. "It'll be like playing USC again. If we don't play better than we did against USC then we'll have a hard time in this series."