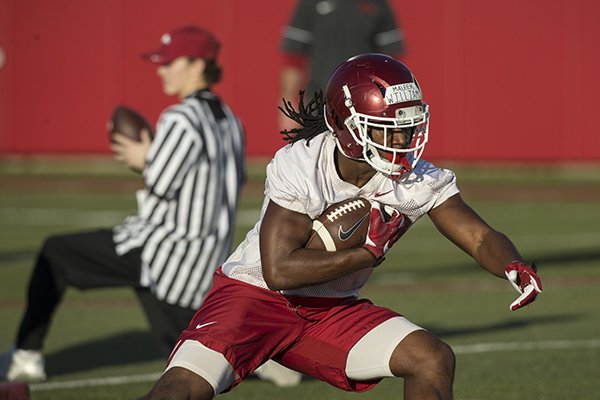 FAYETTEVILLE — Arkansas' first-team offense was off the field after only one play during Day 6 of spring practice last Monday.

Running back TJ Hammonds hit the hole provided by senior left guard Hjalte Froholdt and was off to the races. Froholdt felt the speedy running back graze his left leg, saw him find space and, 80 yards later, the end zone.

"You score a touchdown on the first play of the day it's an awesome feeling," Froholdt said. "You can literally plug all of (the running backs) in. They've all had amazing runs and broke some crazy tackles.

"Coach (Jeff) Traylor has come in here and really encouraged them to be playmakers. They've stepped up to the plate."

Among the takeaways through the first half of spring practices is Arkansas' depth in the backfield. The Razorbacks have an abundance of talent more than capable of springing big runs and bringing flare to Chad Morris' uptempo style. Devwah Whaley, TJ Hammonds and Chase Hayden - whose season ended prematurely following a lower-leg fracture against Auburn - all return as proven assets.

Froholdt raved about the group, but it was defensive lineman Randy Ramsey who sang the backs' praises loudest. Redshirt freshman Maleek Williams, unofficially, led Arkansas with 72 yards and a touchdown on eight carries in the Razorbacks' first scrimmage of the spring on March 10.

To this point, Williams has been most difficult to bring to the ground, and defenders have taken notice. Ramsey had quite the comparison prepared.

"He reminds me of Ricky Williams," Ramsey said. "The physicality, he’s real tough to tackle. You’ve got to bring it when you try to tackle Maleek."

When told of Ramsey likening Williams to the former Heisman Trophy winner, a smile came to his face.

"I'm a big fan of Ricky," Williams said. "I watch his highlights like every other week."

The comparisons didn't stop there, though. Ramsey continued by building up Hammonds and Hayden, two backs who averaged 6.3 yards per carry on 93 combined attempts last season. Hayden scored four times in seven games last fall, and Hammonds broke out against Ole Miss and Coastal Carolina in back-to-back weeks, totaling 263 yards and two scores on 19 touches.

"Chase reminds me of Barry Sanders in the way … he’s real slippery," Ramsey added. "TJ is kind of a scat back like (former Oregon star and current Kansas City Chief) De'Anthony Thomas.

"We’ve got a three-headed monster up at Arkansas. Those guys are dangerously explosive."

Throw Whaley into the mix and Arkansas has a 'Thunder and Lightning' feel to its group of backs. That said, their production largely depends on the development of the Razorbacks' offensive line. Froholdt is the unquestioned leader up front and, as of now, is surrounded by Colton Jackson, Dylan Hays, Jalen Merrick and Brian Wallace. Johnny Gibson is splitting reps with Merrick at right guard with the first team.

Outside of the center position, Arkansas has 72 career starts between Jackson, Froholdt, Gibson and Wallace. Williams likes what he's seen so far from Dustin Fry's bunch.

"I like the progress they've made," he said. "All the conditioning we’re doing is a little different, but everything is just fun, you can see the excitement from them and when they make a big block they’re all hype. And when you score a touchdown they get there first. They run down and high five you."

Arkansas' running backs have a chance to shine in the scheme being installed by Morris and offensive coordinator Joe Craddock. The Razorbacks are sure to live in the shotgun and get the ball out fast to their playmakers. Traylor's room is full of them.