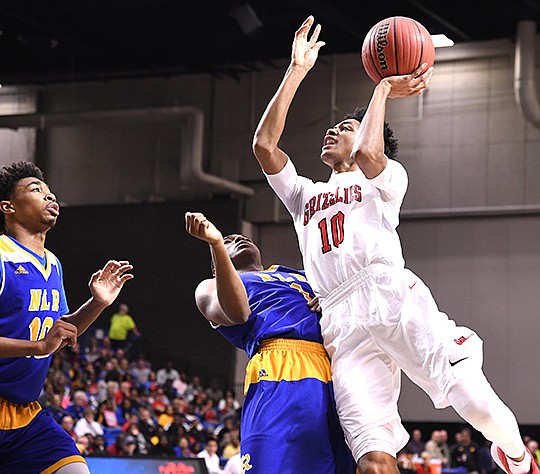 The Sentinel-Record/Grace Brown HOG TIED: Arkansas Razorback signee Isaiah Joe (10) puts up a shot attempt Thursday against North Little Rock's Jeremiah Watson in the Class 7A state championship game at Bank of the Ozarks Arena. Joe led Northside with 15 points, but was held to 6-for-19 shooting and 2-for-9 on 3-pointers as the Grizzlies fell, 64-51, in a rematch of last year's 7A final.

FAYETTEVILLE — Arkansas’ three incoming in-state freshmen may all differ on who they think is going to win the 2018 national championship, but all agree it is something they want to be playing for in the future.

“I have Kansas winning over Michigan in the championship game,” Joe said. “Next year its our goal to get there and we’re just going to work hard and give it all we’ve got.”

“I think Michigan is going to beat Loyola-Chicago and Kansas will beat Villanova,” Henderson said. “My national champion is Kansas.”

Arkansas has gone to the NCAA Tournament three of the past four years and won a game two of those years, but was knocked out in the opening round this season.

“I want us to go dancing in the Final Four,” Henderson said. “I don’t want to lose in the first round, but it is an honor going to the NCAA Tournament.”

Jonesboro guard Desi Sills, who has led his team to back-to-back Class 6A state championships, is picking Villanova to win it all.

“One day I want people to be picking us to win a Final Four game and the national title on this day,” he added. “I believe that we will have the talent to do it. We are going to have a lot of scoring, but the key is going to be us coming in and playing better defense than they have been playing up there lately.”

All six of the Arkansas signees are expected to be on display Thursday night at the Mike Conley All-Star game at Little Rock Hall.

There will be a girls all-star game beginning at 6 p.m. with the boys game slated to tip at 7:30.

“I can’t wait to get out on the floor with those guys and get this thing going,” Sills said. “I’m talking Elite Eight, Final Four and winning it all. That is going to to be our goal.”