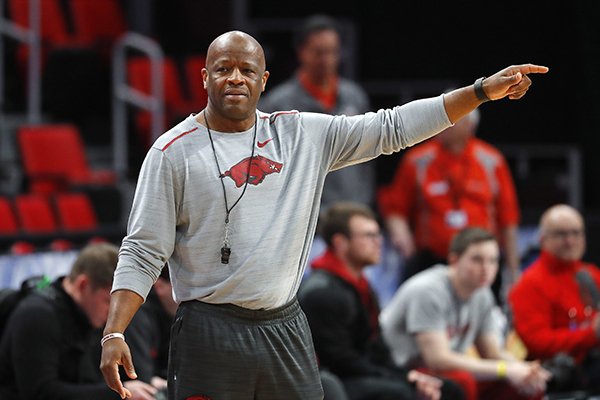 With the addition of 6-10, 235-pound incoming freshman big man Ibrahim Ali, it appears the 2018-19 Arkansas basketball roster is now set.

Man, what a turnover.

There could be as many as 10 new faces on the court this season for the Razorbacks who have never played a minute of college basketball inside Bud Walton Arena.

Scotty Thurman is, but only in street clothes to coach.

No doubt, Arkansas coaches, players and fans are glad 6-11, 233-pound standout Daniel Gafford will still walk through the door, but likely only for one more year before he goes on to big money as an NBA lottery pick.

While some worry about the inexperience of the group — and that’s a very valid concern — I also look at next season’s roster and see more balance, better overall basketball IQ, more talent from 1-13 than on last season’s roster, and the different dynamics to playing the game both offensively and defensively that they bring.

Does that translate to a fourth NCAA Tournament trip in five seasons for the Razorback program?

The guess here is likely, but I certainly wouldn’t bet the house on it until we see how this group meshes and whether the SEC continues its overall trend upward.

210) with the possibility of redshirt freshman and former Little Rock Parkview star Khalil Garland (6-5, 198), who has not yet been medically cleared medically to play.

While you were not going to be able to solve the experience issue — especially when Darious Hall (DePaul) and C.J. Jones (Middle Tennessee) transferred — the addition of Jones and Ali at least added some experience, point production and rebounding as well as another big body.

Ali apparently didn’t play basketball until he arrived in Arkansas in 2014 from Nigeria and averaged just four points, 5.7 rebounds and 1.2 blocks his senior season at Maumelle — not the kind of numbers that bowl one over.

But with that being said, Ali has worked with former Razorback Sunday Adebayo since graduating last summer and improved enough and/or showed enough potential that he originally signed with Baylor and also had offers from Georgetown and Syracuse, among others.

If nothing else next season, he’ll be able to provide rim protection and rebounding to spell Gafford.

This group is not likely to be super sharp out of the gate, such as November 15-18 when the Razorbacks are scheduled to play in the Puerto Rico Tip-off at the Roberto Clemente Coliseum in San Juan.

That could be moved to another venue if Puerto Rico is not ready to host the event, which has Arkansas, Colorado, Cal-State Fullerton, Saint Joseph’s, Wake Forest and West Virginia as its 2018 field.

If that happens, it would be the third straight year the Tip-Off event was hosted outside of Puerto Rico with the Zika virus sending the 2016 event to Orlando, Fla. and Hurricane Maria forcing the 2017 tournament to Coastal Carolina University in Conway, S.C.

Coaches love to say it’s not how you start, but how your finish, although you’ve got to know they want to do both fast.

Buy a program. It’s going to be an interesting ride.

Dudley E. Dawson can be reached at ddawson@nwadg.com.