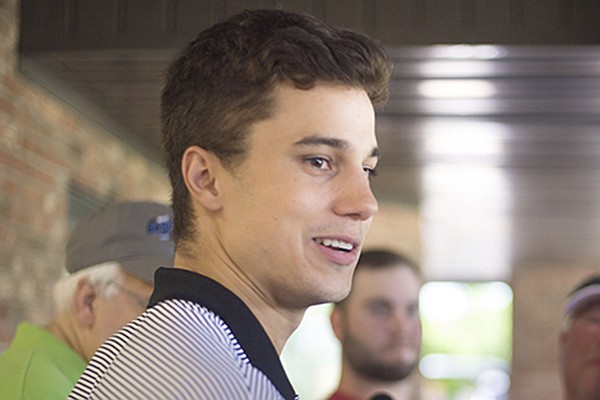 ROGERS — Dusty Hannahs woke up at 5 a.m. one day for a commercial flight that would carry he and the Memphis Hustle to their next NBA G League game.

Hannahs wound up not playing much that night, and it weighed on him.

The former Arkansas star and Little Rock native has done more than his fair share of adjusting to the professional game since leaving Fayetteville following a 2016-17 season that saw the Razorbacks push eventual national champion North Carolina to the brink of an upset in that year's NCAA Tournament.

But he remains confident in his ability and is maintaining his belief of one day being able to make an NBA roster. Hannahs was a career 41 percent 3-point shooter in his two years at Arkansas and shot 43 percent as a junior.

The 6-3 guard, who played at around 212 pounds his senior year, has made changes to his body that he feels will give him a competitive advantage. Hannahs said he is at 196 pounds right now with the hopes of slimming down to 190.

"I think I’d be a clown to sit here and say that I don’t (think I'll play in the NBA)," Hannahs said Monday at Mike Anderson's fourth annual celebrity golf tournament. "I really think I’m going to play in the NBA and I’ve kind of felt that way my whole life. It was kind of a joke when I’d say it (when I was younger), but I fully believed it.

Hannahs battled through a number of adverse situations in his first season with the Hustle, who finished 21-29 last season. Being an understudy for part of the season was difficult, but once given a chance to prove himself, Hannahs took advantage as best he could.

He scored more than 10 points just once over his next 13 games.

The came another breakout, a 26-point performance in a 122-113 loss to the Grand Rapids Drive, the Detroit Pistons' G League affiliate. Hannahs knocked down 6 of 10 from distance and 10 of 17 from the floor in 40 minutes.

He then hit his stride, adding eight more double-figure outings over the team's final 12 games.

"Being able to show people that not only I’m a shooter but I can make plays and make plays for others (was crucial)," Hannahs said. "It was good to show the competition I played, whenever it was one of their NBA guys, an affiliate or two-way guys on the other end, I took it to heart in those games to show them that I can do that at the highest level against those guys.

"Scoring 30 on a guy that got called up for a two-year deal, doing things like that I think you’ve got to keep pressing the issue and I think that’s what I’ve been doing."

Hannahs had the opportunity to play professionally – and for more money – in Poland, but opted to remain in the country and join the Hustle. The decision was a no-brainer for him once he played with the Grizzlies' young players.

"They were going to pay me good in Poland, but it was weird. I kind of just realized I don’t want to go to Poland," he said with a big laugh. "G League pay is up now. That’s obviously not what you’re doing it for, though. You’re doing it for an opportunity."

Anderson, who coached Hannahs for two seasons, said he wouldn't be surprised to see Hannahs use his gifts to make an NBA roster at some point.

"Dusty is one of those guys, man. He’s going to keep working and working until … he’s wearing out our practice gym, I know that," Anderson said. "He is over there every day working out with our strength and conditioning coach (Adam Petway). Dusty, he’s on a mission."

Former Arkansas standout and Chicago Bulls forward Bobby Portis, also on hand at Anderson's golf tournament, echoed Anderson. The remainder of the offseason and summer league is when players make their strides.

Portis, who began playing on teams with Hannahs back in third grade, hopes a team will take a chance on his childhood friend.

"Everybody's path is different. Everybody has to go through different things," Portis said. "That's when they start locking in on guys that are free agents. Obviously, everybody knows he can put the ball in the hole and shoot at a high level.

"He can shoot the ball and come downhill and get to the basket. I feel like he'll have a good shot."

Hannahs, who will be on campus much of the summer working out and training, will participate in The Basketball Tournament this summer and compete with Team Arkansas for a shot at $2 million. Team Arkansas' roster is comprised of former Razorbacks Ronnie Brewer, Ky Madden, Michael Qualls, Alandise Harris, Marshawn Powell and others.

The team's general manager is Nick Mason (2008-11), a former Razorback and co-host of The Morning Rush radio show.

Hannahs is ready to work toward the grand prize.

"I think it’s going to be fun. It’s a bunch of guys trying to win $2 million, so the stakes are going to be really high and it’s going to be super competitive," he said. "I’m ready to see some old friends like Ky Madden and everybody, Jabril Durham and get started and win some money."

Hannahs watches and keeps up with the NBA, and sees the way in which the game is evolving toward the 3-point line. It excites him. He is also adding elements of his game, like improved defense, to his repertoire in hopes of delivering when the time comes.

Until then, he's keeping his head down, working and holding the belief.

"I think that's what it comes down to with the small percentage of people who get the chance is if you stick with it and you’re patient enough. You also have to take care of your due diligence and work hard," he said. "So I’m just going to keep doing that and have fun doing it.