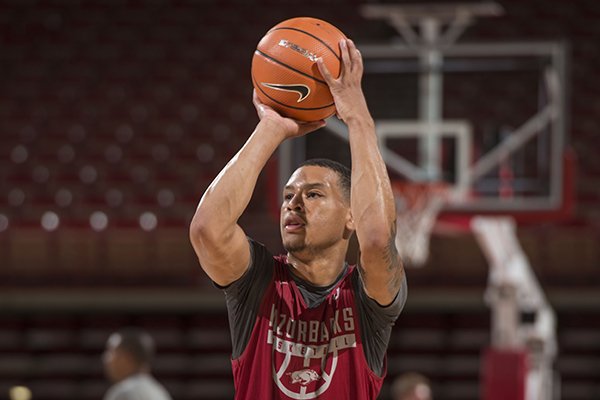 Garland, a 6-5 guard from Little Rock Parkview, redshirted last season as a true freshman because of an undisclosed health condition. He was able to do some drills, but not go through contact drills or scrimmage.

"No update yet," Anderson said speaking to the media at his charity golf tournament.

Anderson said he remains optimistic Garland will be cleared to play.

"Yes, yes, very hopeful," he said. "We'll see what takes place as the summer goes on and we get into the fall. We'll see where we are at that point in time."

The University of Arkansas, Fayetteville was scheduled to be among the teams playing in the Puerto Rico Tipoff Classic in San Juan on Nov. 15, but the Razorbacks won't be part of the event, Coach Mike Anderson said.

Many parts of Puerto Rico remains without power after the damage inflicted on the island by Hurricane Maria last fall.

"It's unfortunate what took place there," Anderson said. "And I'm sure that they'll eventually get the tournament back down there."

Anderson said Arkansas is attempting to schedule another early season tournament in which the Razorbacks could play three games under NCAA rules.

Daly said he decided to attend the event after having to withdraw from the final round of the PGA Tour Champions stop at Birmingham, Ala., last weekend because of a right knee injury.

"I really didn't do much today," Daly said. "Just kind of goofed off a little bit. But I wanted to support my man, Coach Anderson. Any time I get chance to come and support the Hogs and the coaches, I always try to do it.

"Me and [Anderson] have known each other for a long, long time and he's a dear friend. I thought i'd just come up and surprise him and chill out with him."

Daly went around the course with Nolan Richardson, the former Arkansas coach who led the Razorbacks to the 1994 national championship.

"Oh, it was awesome," Daly said. "I haven't seen Coach in a while. It's just great for us. We don't get to see each other enough."

Daly, 52, said he was impressed with how Richardson, 76, hit his shots.

"I hope I can hit a golf ball the way he does when I'm his age," Daly said.

Daly said he's hopes to resume playing on the PGA Tour Champions in a couple of weeks.