Hogs getting a good look at Florida prospect 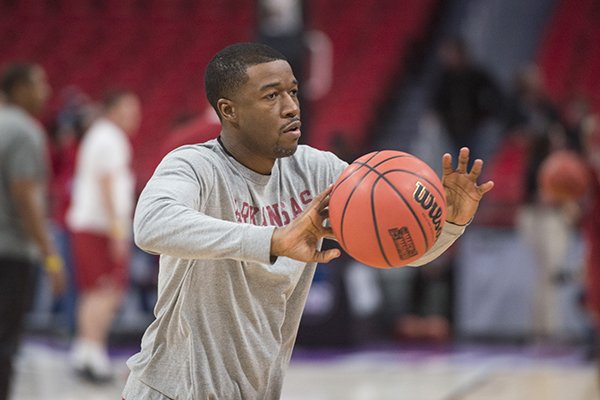 The University of Arkansas, Fayetteville is likely to get an official visit from junior forward CJ Walker, one of the more the athletic prospects in the nation.

Walker, 6-8, 183 pounds of Orlando Christian Prep has 33 scholarship offers from Arkansas, Alabama, Florida, Florida State, Texas A&M, Georgetown, LSU, Louisville and others. He plays for Florida-based 17-under E1T1 on the Nike EYBL circuit.

E1T1 assistant coach and Walker's mentor Marcus Robinson, along with Walker's father Fareed Ford, are assisting him in the recruiting process.

"There are schools out there that we tell 'No, we're not interested' because we don't think it will be a good fit on and off the court, but Arkansas has a legitimate chance," Robinson said. "I mean a really legitimate chance of landing CJ."

"We do feel like there's a 90 precept chance they'll get an official visit because we like Arkansas that much."

"The one thing they're emphasizing with CJ is him being able to get the rebound and initiate the break," Robinson said. "Their defensive style of play fits CJ so well. The full-court press, the trap play, the passing lanes. That's CJ's game all day. Arkansas is a no-brainer to us. We'll be a fool to not even to say Arkansas has a chance because they fit the mold of a player like CJ."

Walker is averaging 14.8 points, 9.2 rebounds and 2.2 blocks a game this spring while shooting 57 percent from the field. Prephoops.com rates him the No. 71 prospect in the nation for the 2019 class.

Anderson and Cleveland were court side for a game during the evaluation period and Robinson was impressed with their focus.

"Usually, I'm at the end of the bench, and I'm always scoping out who's coming to see him play," Robinson said. "Who's taking time out to sit through the game or who's on their phone the whole time while he's watching him. Not one time was coach TJ or coach Anderson on their phone the whole game. They were glued in. They watched a lot of body language. They were watching CJ from the time he was warming up."

Anderson has pointed out Arkansas' willingness to play freshmen.

"That's a big selling point right there," Robinson said. "To know the freshmen aren't just on the bench. They're actually making an impact."

A school's ability to develop players for the NBA is another focus for Walker.

"That's one thing that's intriguing about Coach Anderson, his pros aren't just in the pros, they're actually playing," Robinson said. "Starting good minutes, so those are things we look at, too."

Walker led Orlando Christian Prep to 27-4 and 21-9 records and to back-to-back Class 3A state championships the past two seasons while earning MVP honors in each game. He averaged 14.9 points, 11.2 rebounds, 3.2 block shots a game as a junior.

"He played with Joe Johnson," Robinson said. "There's a lot of connection and chemistry there. We do like the family ties they have."

Walker will take his official visits during the fall and is expected to sign during the early signing period in November.

"We more or likely want to come out there for a football game," Robinson said of Fayetteville. "So he can get the whole feel of what it feels like to be an Arkansas Razorback."