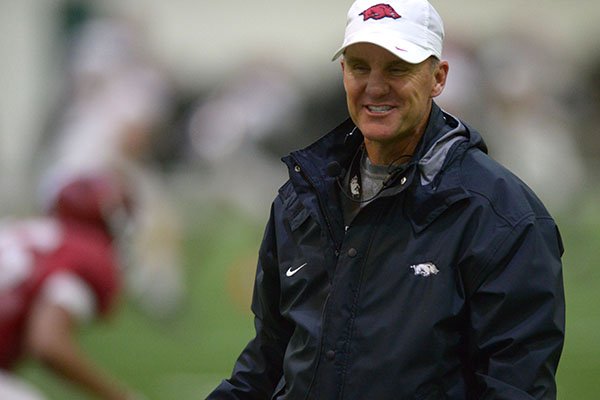 Arkansas coach Chad Morris speaks with players Wednesday, March 28, 2018, during practice at the university's practice facility on campus in Fayetteville.

The 52-year-old die-hard Razorbacks supporter and golfing legend is a big fan of what Morris, John Chavis and the rest of Arkansas’ new football staff bring to the table.

Perhaps most of all, though, he’s looking forward to finding out if Arkansas can field a top-tier defense under Chavis.

“We haven’t had a decent defense in … Y’all tell me. I don’t know,” Daly said Monday at Arkansas basketball coach Mike Anderson’s fourth annual celebrity golf tournament at Shadow Valley Country Club. “I don’t think since we’ve been in the SEC we’ve ever had a top three or four defense.

“It’s great to score points, but you have to stop the other team, and hopefully we’ll get our defense going.”

When gauging his level of excitement for Arkansas football, which has hired a new head coach and nearly completed a $160 million renovation of Donald W. Reynolds Razorback Stadium since December, Daly said he’s on board and eager to find what the future holds for his favorite team.

“More for me, I think it’s just the whole … AD, everything is coming together,” said Daly, who rode the course with Nolan Richardson on Monday. “We’re going to be a faster football team. That’s the way Chad coaches and you’ve got to be fast in the SEC. … So I’m excited about it.”

Daly also expressed support for the Arkansas men’s and women’s golf programs as well as coach Courtney Deifel’s softball team, which is heading to its first super regional this weekend in Norman, Okla.

“I saw the men qualify (for NCAAs). I know the ladies did real well,” he said. “And we've got our boys out on the tour. A couple guys have won. Andrew Landry won and (David) Lingmerth has been playing good. It's great to see it.

“Brad (McMakin is) a hell of a coach. He always has a great program. Even when we played against him when he was at Lamar, he had a great team at Lamar as well. Thank God Arkansas got him, because he's a great coach.”

“I love it. We won three in a row at home,” he said. “I know we had the regionals here, beat Wichita State 6-4, and now we’re going to Norman. Hopefully we can beat Oklahoma two out of three. … (Deifel) has done a wonderful job for our girls' softball.”

He hopes to return to the PGA Tour Champions in a few weeks. Daly is battling a right knee injury, which forced him to withdraw from play in Birmingham on Sunday, and a separated right shoulder from 2007.

“I’ll take it easy,” he said. "(My doctor) down in Houston told me, 'You'll be all right. You'll be good in two weeks. You'll be able to walk and everything.' So we'll see what happens.”