Long wait worth it for former Razorback Bobby Portis 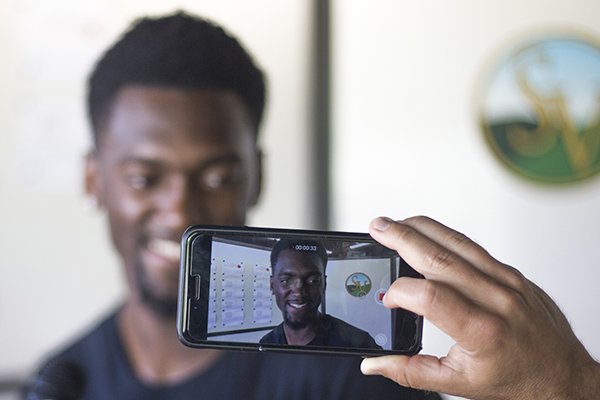 A lot nicer than flowers and a card or candy or lunch at a fancy restaurant.

Portis got his mother, Tina Edwards, a house in Maumelle as a surprise.

It was a moment in the making for years said Portis, a former Little Rock Hall and University of Arkansas, Fayetteville basketball player who recently completed his third NBA season with the Chicago Bulls.

"It's been a dream of mine forever," Portis said Monday at Arkansas Coach Mike Anderson's charity golf tournament. "I've worked as hard as I can each and every day to be the best player I can so one day I could get drafted and be able to help provide for my mom and my little brothers.

"When you're a kid and you see your mom working as hard as she can to provide for you, and then you can provide for her, it's a great feeling."

Portis, 23, said he spent a long time picking out the right house for his mother and brothers.

"I always had the vision of me signing pro and trying to save money and then looking for houses," Portis said. "I looked for houses for about 16 or 17 months, so it was a long process.

"We had a list of about 50 house choices and narrowed it down every month and I found the dream house for my mom."

Portis said that when he drove his mom and brothers to their new house, he told them it was for a Razorbacks charity event.

"They had no clue what was going on," he said.

When Edwards arrived at the house, she walked into a fully furnished home filled with family and friends.

"Everybody yelled 'Surprise!' and my mom started crying," Portis said. "She was just so ecstatic for all the hard work we put in for it.

"Every day I think about it. My mom still texts me two or three times a day and can't believe it."

Portis, a 6-11 forward, signed a four-year contract worth $6.85 million after the Bulls made him their first-round pick -- and No. 22 overall -- in the 2015 NBA Draft. His base salary was about $1.5 million this season and is scheduled to increase to $2.4 million next season, but there's a possibility Chicago will sign him to a contract extension after he averaged career-bests of 13.2 points, 6.8 rebounds and 1.7 assists in 22.5 minutes as the team's sixth man.

"We've been talking about it for about a month now," Portis said of an extension. "Hopefully we can come to terms.

"I feel like I've put myself in a great position. They know what they're going to get out of me each and every day. I come to the gym early and leave late.

"I feel like we'll get everything worked out. But, if not, I'll play my fourth year and still try to ball out as much as possible. It's been a fun ride, and hopefully I can keep riding this thing out."

Bulls Coach Fred Hoiberg praised Portis when talking with the media late in the season.

"He's able to back down on guys in a league that's really gone to a lot of switching. He can punish the switch on the block," Hoiberg said. "With a big guy guarding him, he has the ability to stretch the floor where he's shown the improvement over the course of his young career to do that.

"So, we're really happy with Bobby, and I think he's solidified himself as a big part of our future."

Portis' future with the Bulls looked shaky when the team suspended him for the first eight games after he punched teammate Nikola Mirotic -- who suffered a concussion and facial fractures -- during a practice in October.

"Both players owned responsibility in the incident itself," John Paxson, the Bulls' vice president of basketball operations, said when the suspension was announced. "But only one player threw a punch, and that punch connected and for us that is inexcusable."

Portis apologized to Mirotic as well as his other teammates, the Bulls organization and the fans when he met with the media before the season opener.

"I think some people kind of thought, 'Oh, that was just his first two games back. He had something to prove,' " Portis said. "But I continued that consistency all year."

Anderson said he was impressed with how Portis handled a tough situation.

"I always say that you're going to have some adversity," Anderson said. "How do you deal with it?

"If you think about Bobby, he used that as fuel ... I think it's going to pay off for him because to me, it's not that initial contract when you get in there, it's that next contract. That's what he's working on.

"I'm so proud of him just getting through that and then going out and doing what Chicago brought him up there to do, and that's to be a contributor to their program. I think the city of Chicago, they love Bobby Portis."

Portis said he loves playing in Chicago, too.

"It's a blue-collar city and I'm a blue-collar player," he said. "The fans there really embrace those players that go out on a nightly basis and give it their all."

Portis averaged 17.8 minutes in 62 games as a rookie and 15.6 minutes in 64 games his second season with the Bulls.

"Even when I wasn't playing, the fans stuck behind me," he said. "They had a 'Free Portis' movement my first two years, and now every time I check into the game, the crowd just goes crazy for me. "

Hoiberg said in March that a key for Portis' improvement was playing with more confidence.

"It's great to have Bobby. He plays with such a swagger and a confidence and brings that energy every time he steps on the floor -- and we need it."

Portis, who had four starts in 73 games this season, smiled when asked if be believes he's ready to be a starter.

"I get that question every interview I do," he said. "I've always been a team player, team-first guy.

"Right now, I'm cool in my role. Me being a sixth man, being a scorer off the bench, is a pretty good gig in the league. But everybody wants to be a starter, and I do, too."

The Bulls showed their confidence in Portis when they traded Mirotic and a second-round draft pick to New Orleans on Feb. 1 for center Omer Asik, guards Jameer Nelson and Tony Allen and a first-round pick.

"John Paxson texted me after they made the trade and told me he wanted to keep me because he feels like I'm a guy they believe in the most, that they wanted around," Portis said. "He told me to keep working as hard as I can and keep getting better.

"One thing about this league, the guys that work get rewarded."

Portis said his strong family ties helped him bounce back from behind suspended.

"Having a strong mother, having strong little brothers and having a strong support system behind me that always supports me," Portis said. "Even though the season started off really tough, I stayed grounded and had people around me that really helped."

The night before Mother's Day, Portis was staying at his family's old house and sitting on one of his brother's beds.

"His bed wasn't big enough and I was like 'Dang, bro, you're getting pretty big for your bed,' " Portis said. "He was like, 'Yeah, Mom said she'd get me a new one next week.'

"They didn't know about the house coming up. Surprising them was just a real nice experience."