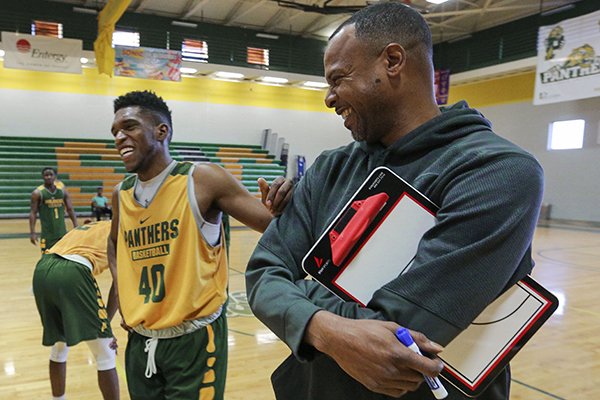 FAYETTEVILLE -- Todd Day used to play in the NBA. Now he coaches in the NAIA.

Day, the former Arkansas Razorbacks All-American forward who played eight seasons in the NBA, recently completed his second season as the head coach of Philander Smith College in Little Rock.

Making the transition from playing basketball at the highest level to coaching in the smallest college classification, Day said, hasn't been a problem.

"Basketball is basketball no matter where you go," Day said this week after playing at Razorbacks Coach Mike Anderson's charity golf tournament. "More importantly, it's about trying to help these guys out in life, using basketball as a tool.

"I really get a kick out of that part of it."

Philander Smith, which plays in the Gulf Coast Athletic Conference, has finished 16-13 and 16-11 in Day's two seasons as coach. He was named GACC coach of the year after his first season when the Panthers improved from a 14-16 record.

"I think we're going in the right direction," Day said. "The third season is usually when a new coach makes his biggest strides to be better as a program. So we're looking to make a push.

"We've got six freshmen coming in. We're going to be young and inexperienced, but I think we'll make up for it with our athleticism."

The University of Arkansas, Fayetteville has seven freshman signees coming into the program this season and 10 newcomers overall.

Day said he likes the athleticism of the Razorbacks' additions, too, and how they'll fit into Anderson's system.

"I just hope everybody will be a little patient, because we're going to have a lot of freshmen," Day said, referring to the Razorbacks. "There are going to be some tough days for them.

"As a freshman playing for Mike, you've just got to keep your head up and keep pushing, because it's a demanding style. Guys can't do it just a couple days a week. To be successful, you've got to prepare your body to do it every day."

Day, 48, came to Philander Smith after coaching at Memphis Hamilton High School, where he was a McDonald's All-American playing for his stepfather Ted Anderson. He also coached at the Memphis Academy of Health and Sciences and was an an assistant for Team Penny, a Memphis-based AAU organization founded by Anfernee "Penny" Hardaway, who was recently hired as the head coach the University of Memphis.

Day said he enjoys coaching at Philander Smith and living in Little Rock -- his wife Brenda's hometown -- but that he hopes to move up in the profession.

"I'd love to be on a big-time sideline one day," Day said. "I'd love to be helping Mike back here at Arkansas if possible. But I'll just wait my turn and keep grinding."

Day played four seasons at Arkansas, 1988-89 through 1991-92, and became the Razorbacks' all-time leading scorer with 2,395 points -- an average of 18.9 for 127 games. He still holds the record and it's hard to envision it being broken considering top college players now usually leave for the NBA after their freshman or sophomore seasons.

It's a far different process than what Day experienced when he played at Arkansas. He was the No. 8 pick in the first round of the 1992 NBA Draft by the Milwaukee Bucks.

"Now if somebody has a good year or two, he usually moves on," Day said. "So I'm looking forward to keeping that record."

Day said he coaches the same style of basketball he played at Arkansas for Coach Nolan Richardson.

TODD DAY AT A GLANCE

NOTEWORTHY Arkansas’ all-time leading scorer with 2,395 points from the 1988-89 through 1991-92 seasons … Averaged 18.9 points in 127 games for the Razorbacks … Played on Arkansas teams that were a combined 115-24, won four consecutive conference championships and played in four NCAA Tournaments, advancing to the 1990 Final Four … Picked No. 8 overall in the first round of the 1992 NBA Draft by Milwaukee … Averaged 12.3 points in eight NBA seasons … Played for the Arkansas Rimrockers and the Arkansas Aeroes in the ABA … High school coach in his hometown of Memphis before taking the Philander Smith job … Has a 32-24 record in two seasons with the Panthers … Inducted into the UA Sports Hall of Honor in 2002, the Arkansas Sports Hall of Fame in 2008 and the Southwest Conference Hall of Fame in 2015 … McDonald’s High School All-American at Memphis Hamilton.