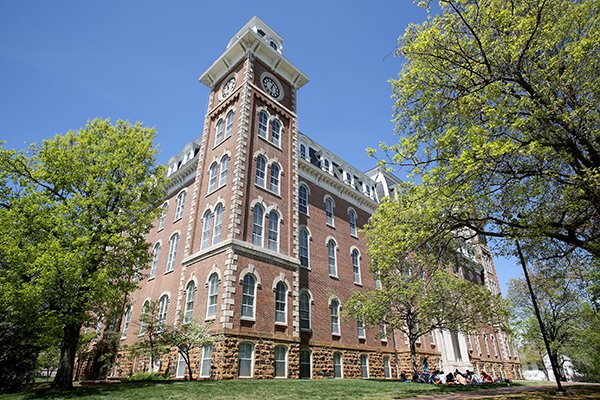 This April 17, 2017, photo shows Old Main on the University of Arkansas campus in Fayetteville.

FAYETTEVILLE — All of Arkansas' athletic programs exceeded the multi-year benchmark score of 930 in the NCAA's Academic Progress Rate in 2016-17, according to data released Wednesday.

Arkansas' women's basketball team fell below the NCAA benchmark in single-year reporting for 2016-17. The program's score of 909 was down from 1,000 the year before, but its multi-year score was a heathy 984.

The score reflects the final year of Jimmy Dykes' tenure as head coach, a year in which multiple players transferred out of the program. Mike Neighbors oversaw Arkansas' final month of the latest reporting period after he was hired from Washington in April 2017. Neighbors' final Washington team had a single-year APR of 960 and a multi-year score of 990.

Women's track fell from 981 to 944 in single-year reporting, and has a multi-year score of 974. The score encompasses athletes for both the indoor and outdoor teams.

APR is one of two calculations - the Graduation Success Rate is the other - the NCAA uses to monitor the overall academic performance by athletes at each school. Multiple years below NCAA benchmarks can result in penalties, such as reduction in scholarships or postseason bans.

In APR, each athlete receiving athletic-related financial aid earns one point for staying in school and one point for being academically eligible each semester, for a total of four possible points per athlete, per year. A team’s total points are divided by points possible and then multiplied by 1,000 to equal the team’s APR score.

The NCAA reports are for one- and four-year periods and do not reflect the most recent academic year.

At Arkansas, men's basketball has recorded a perfect single-year score in the two most recent reporting periods, raising its multi-year score to 985, up from a low score of 886 in 2008-09, which eventually prohibited the Razorbacks from using a scholarship for one season.

Arkansas was one of six Southeastern Conference basketball programs to record a perfect single-year score in 2016-17. Its 985 multi-year score is tied for sixth-highest in the conference.

The Razorbacks' football team also has seen its single- and multi-year APR scores increase significantly in recent years. The 2016-17 single-year score of 988 was tied with Vanderbilt for highest in the conference, and was seven points higher than the year before. Arkansas' multi-year score is 977, which is tied for fourth-highest in the SEC.

The multi-year score reflects the first four full years under former head football coach Bret Bielema and is the program's highest score by 11 points since the NCAA began assigning APR scores in 2004-05.