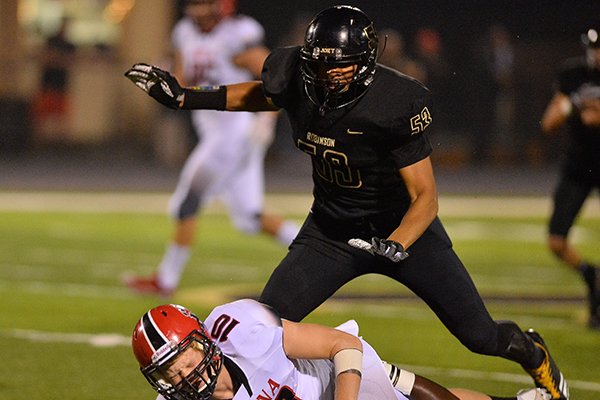 Zach Williams' love for animals has made for an interesting home life for his mother, Keli.

Williams, who's one of the most coveted defensive ends in the nation, has mended birds back to health, has pampered turtles in air-conditioned comfort and taken in stray dogs.

Her son's actions remind Keli of a character played by Eddie Murphy, who conversed with animals in a popular 1998 movie.

"He will go out and find the owners," Keli said of the dogs. "He'll bring them in, feed them and water them. He's just like Doctor Doolittle. That's what we call him."

A self-admitted city girl and germophobe, Keli recalls when her five-year-old Doctor Doolittle brought his first turtle into the house.

"I was in the bathroom putting makeup on and he came in with this turtle in his hand. I screamed and he dropped it," Keli said. "So I screamed even more because the turtle was on the floor."

Zach remembers his first turtle incident with his mother.

"She kind of flipped out," Zach said.

His mother ponders how his personality on and off the field are total opposites.

"He's so violent on the football field, but yet off the field he's like this gentle giant," Keli said. "He's got a big heart, especially for his animals."

Zach has a 3.6 grade point average at Joe T. Robinson and is looking to major in animal sciences or biology in college with hopes of becoming a veterinarian, zoologist or marine biologist.

"I think I just found them interesting," he said about animals. "They don't really communicate with us the way people do and they come in all different shapes and sizes and they live different forms of life and I've always found that interesting."

His father Rickey was a four-year letterman at Arkansas from 1984-87 and was All Southwest Conference as a senior.

A trip to the state fair when Zach was 4 years old led to Zach's first pet, a goldfish he named Goldie. He won Goldie during a game of ring around the bottle.

"I just knew he wasn't going to get the ring around the bottle and sure enough he did and he won that goldfish," Rickey said. "Goldie lived a normal lovely life as long as a fish could and Goldie went on to fish heaven."

Zach, who nursed a bird back to health this week after it hit a window on the back deck at his house, went from a small fish bowl to a 50-gallon tank filled with a variety of fish that currently sits in his bedroom.

When he was 13 years old, Zach was home with his older sister in the process of spoiling another turtle by feeding it lettuce while his parents were away. The turtle's stay was short-lived once his parents arrived home.

"He had it on my leather ottoman -- and it was a big one," Keli said. "It wasn't even a turtle. It looked like a tortoise."

Rickey tried to use Zach's love for birds to motivate him while playing flag football at age 6.

"I was trying to figure out a way to motivate this kid to get more aggressive," Rickey said. "I told him if you do well this season, I'll get you a bird."

Rickey's plan was foiled by Keli, who objected to Zach's request for a bird.

"That was a big, big fight," Rickey said. "We had to settle on buying him more fish."

Zach's favorite pet is their dog Cairo, whom Keli found roaming the neighborhood about 12 years ago. Cairo's unconditional love has given Zach a lot of memories.

"I guess my favorite is when you sleep in and he likes to climb on your bed and lay with you until you wake up," Zach said. "The first thing I see is him looking at me and I like that."

His latest request is to fill the 50-gallon tank with lizards and turtles.

"I'm like Zach. I couldn't even sleep at night knowing that stuff was in the house," Keli said. "That's our battle now."