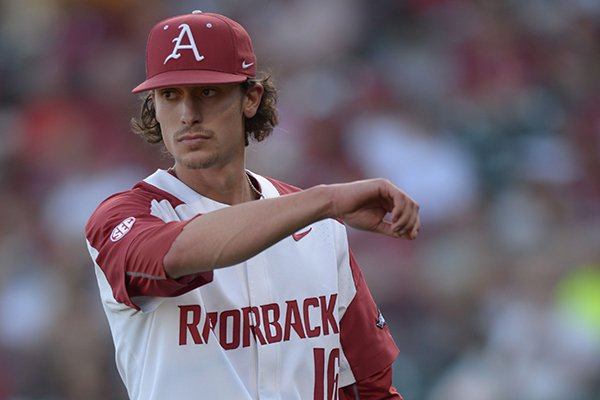 Arkansas pitcher Blaine Knight wipes his face during a game against Texas A&M on Friday, May 11, 2018, in Fayetteville.

Knight (10-0, 2.78 ERA) will pitch on seven days of rest after throwing six innings in the Razorbacks' 8-2 win over Florida last week at the SEC Tournament. Arkansas coach Dave Van Horn said earlier this week that left-hander Kacey Murphy, the team's No. 2 starter, might pitch the opening game because he was more rested.

The Razorbacks (39-18) are 12-3 this season in games that Knight has started and have not lost when he is on the mound since April 20 at Mississippi State.

"He's very mature on the mound and whether it's going good or bad, you really can't tell," Van Horn said last week. "A couple of years back it wasn't that way. I think he realizes he has the stuff to get out of jams and stay under control.

"I feel like we play really good (defense) behind him. It seems we make play after play and he makes pitch after pitch, and when he gets in a jam he seems to find a way out of it and keep us in the game. He doesn't give up big innings. I'm just glad he decided to come back for his third year."

Knight was projected to be a high-round selection in the MLB Draft when he was an eligible sophomore last June, but fell to the 29th round because of a high asking price for a signing bonus.

But the draft didn't begin until after the Razorbacks lost their regional championship game against Missouri State at Baum Stadium. Knight, who started a loss to Missouri State that sent Arkansas into the loser's bracket two days earlier, asked to pitch out of the bullpen that night, thinking it would be his final college game at home.

He retired the final two batters during the eighth inning of the Razorbacks' 3-2 season-ending loss to the Bears.

"I didn't really know what was going to happen with the draft and everything, but I did want to pitch here one more time just in case that was my last chance," Knight said. "It turned it wasn't. I'm happy I'm back and I'm happy that we got a regional here again."

Oral Roberts (38-18) is expected to throw senior left-hander Miguel Ausua against Arkansas on Friday. Ausua (8-1, 3.27) ERA was the losing pitcher in the Golden Eagles' 3-0 regional-opening loss to the Razorbacks last season when he went 6 1/3 innings and allowed one earned run.

"He held us down pretty good last year," Van Horn said. "It was a tight game. He's a good pitcher."