UNDER THE RADAR: Bentonville West's Will Jarrett 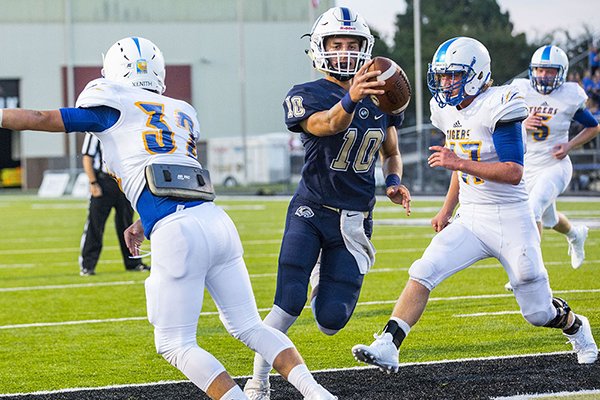 Bentonville West quarterback Will Jarrett (10) runs into the end zone for a touchdown during a game against Pryor, Okla., on Friday, Sept. 1, 2017, in Bentonville.

Each Wednesday we feature an in-state prospect that could be flying under the radar of college coaches. This week's UTR prospect is Bentonville West’s Will Jarrett.

“In my 23 years, he’s the best quarterback I’ve ever had. I guess the knock on him is he’s not 6-5. He plays baseball so he doesn't get to hit the weight room much. No true offseason because he’s always playing. He’s a kid the ball jumps off his hand and he has great fundamentals and he’s really, really smart. He made 26 on his ACT.

“He’s a steal for anybody that recruits him. That’s what I tell the coaches when they come in. Obviously, we’ve had numerous people show up looking at Jadon (Jackson) and Kendall (Young), and he's the one I always tell he's the steal of the whole Bentonville West recruiting."

“He’s a high 4.7 guy. He’s really good change of direction. He’s had the longest run in our school’s history with 80 something yards against Cabot when he was sophomore. He’s just a football player. If you remember, our first year we didn't have any seniors and we had to play kids both ways and he got the Northwest Arkansas Touchdown Club Player of the Week twice and in both those games he led us in tackles, had 300 yards passing and 100 yards rushing.”

“I haven’t coached a kid that’s any tougher than he is because he’s taken some shots the last couple of years and always bounces back.

“He’s a true quarterback. Everything we do offensively he makes it work because he’s really got a quick release and is really smart. He can check down and keeps the play alive. It’s hard to coach the young kids how to keep the play alive, stay in the pocket even though you’re getting some pressure. A lot of kids want to take off running. He understands how to buy his receivers time.

“He’ll end up getting a Division I offer. It’s just going to be probably late and somebody thinks they’re going to get somebody else and it doesn’t pan out. I’m telling you, he’s a steal.”