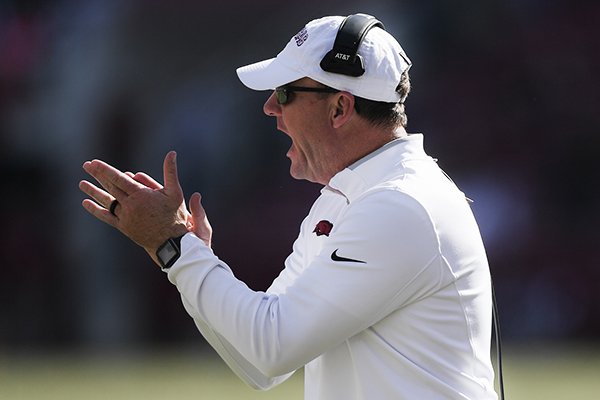 Arkansas Razorbacks head coach Chad Morris calls out to his players during the fourth quarter of a football game, Saturday, October 27, 2018 at Donald W. Reynolds Razorback Stadium in Fayetteville.

Here are a couple of depth chart notes ahead of the LSU game this weekend:

– Rakeem Boyd is still listed as Arkansas' starting running back, then Chase Hayden and Maleek Williams follow. Running backs Devwah Whaley and TJ Hammonds are not listed. Whaley is recovering from ankle surgery, and Hammonds had a similar operation on his ankle. We will likely get an update on Whaley today.

– For what it's worth, senior receiver Jared Cornelius is listed as a starter at receiver and a backup on punt return behind Deon Stewart. Cornelius has been dealing with an ankle injury and did not play against Vanderbilt. Cornelius has had a rough senior season to say the least. He has just one catch for 11 yards in Arkansas' last five games.

– It was a much-needed bye week and we got a chance to get some guys back and get our legs underneath us. We had a chance to focus on ourselves, and that message won't change. We got a lot of live work with young players, too. Got back in last night with meetings.

– I watched the Alabama-LSU game and it was two very talented teams. "That was a ball game." Guys laid everything out on the field. LSU will get our best this week. We know they will come back in and get ready to face us on Saturday.

– We expect Dre Greenlaw and Jared Cornelius to be back. They were practicing in green last night.

– We'll continue to develop these young guys. Guys who stood out in live work were Joe Foucha, Isaiah Nichols, Dee Edwards. Offensively, Connor Noland and John Stephen Jones got a majority of the reps at quarterback last week. Koilan Jackson had a great catch last week. We've cut practice back a little bit with some of the older, high-rep guys.

– I wasn't going to watch football on Saturday, but something was missing and I watched some games and it made me want to get back to it this week. We did good on good last week but it wasn't as much as it would have been had our bye week come earlier in the season. The energy level was high.

– No question that the LSU game was a big game and a big talking point among fans as I traveled the state after taking the job in December.

– We went about 20 minutes last night in a scrimmage, and we'll do it again next Sunday night. We did that three times during the bye week and continuing the development of the young guys.

– It's important to change the routine a little bit, Morris said of the coaching staff. We gave everybody Saturday off and that was big. Got back in on Sunday. We have 20 days remaining, and we're going to sign a one-day contract for those 20 days.

– Ryan Winkel came back after the surgery and he's working some right tackle and getting a lot of work on scout team. Silas Robinson has been working center and guard. We'd like him to transition to center. They are going through our Power Hour program - an accelerated weight program. A lot of young players need that core strength and it really pushes them in a positive way heading into spring ball.

– Injuries: Anticipate Kevin Richardson being back, Jeremy Patton isn't ready and Whaley "is close" but will be evaluated throughout the week.

– Chandler and I got away and sat in a deer stand on Saturday. I didn't have any bullets on me. I just enjoyed being out there and being away. Got to watch Chandler play Friday night. I texted our players a little but during the time off and told them I couldn't wait to see them again.

– LSU has one of the best secondaries we've seen. Devin White is one of the top linebackers in the country. They're all very sound and run well. They really pursue the ball. You see why teams have not had much success in the passing game very quickly when watching film.

– The seniors and the staff has had an open dialogue, and it's been challenging but we've worked on building a trust this year. That's why you've seen some of the progress that's been made. Their attitude and how they approach every day is big.

– I've had several players from Louisiana come up and tell me how much this game means to them. They understand it and they get it. I said, 'They're all big,' but they're very excited.

– Huge recruiting weekend coming up. I'm glad we've got a 6:30 p.m. kickoff and I think it's great for the recruits to see that. I've never coached in a night game here. We have to address team speed between now and signing day. Offensive and defensive line is always a big area. I anticipate signing a majority of our class on Dec. 19.

– The rivalry and passion level for the LSU game ... it's always a battle. It's absolutely a war. That's what I remember most.

– It's a chance to honor the time and investment these guys have put in on Senior Night. We want to show our appreciation. This isn't going to be a week where it's all about them. It's been about them all year long. These seniors have a chance to run out of the tunnel one last time.

– It's always a special time for players to play one last time in their home stadium. No matter where you are, it's special. Hopefully they're going to be ready to finish out the year.

– We didn't play well enough to win two weeks ago. It's big plays and missed tackles. When I say that it gets right back to the root of the whole deal, and that's coaching. We had some guys who played with effort, but playing hard sometimes isn't good enough. I had a chance to go out recruiting. Can't talk about that, but we did get some young guys some work.

– Andrew Parker's first full week last week was decent. He was rusty as a football player and needs every rep he can get. He's going to be a work in progress. He's changed his body, and that's been good. We'll keep pushing him to be the best he can be.

– Both of the young safeties played well in the scrimmages last week. Dee Walker is very, very talented and it's a process in terms of learning and doing the right things at the right time. I've got to help him with that. I was pleased with his ability to come out and work hard and take advantage of the time he had.

– LSU is a very talented team. Joe Burrow is a capable quarterback and their receivers are good and have good speed on the outside. They have earned the right of being one of the top 2-3 teams in the league and the nation. Offensively, there is talent all over the field.

– We are going to do everything we can to win. It's win first, build second. If it means playing two linebackers the entire game with no rest then that's what we'll do. We'll see how things go as far as playing younger players. We're working every day to be our best and win. If playing young guys gives us the best chance to win then that is what we'll do.

– We've got to get back up to the standard of where Arkansas was in 2011. ... I spent six years at LSU and enjoyed it. But what do they say? All good things come to an end. There's not a guy who thought I'd ever leave Tennessee after 21 years. You take advantage of the chances you get, and I'm Arkansas through and through. We've got to keep pushing the envelope. I want to make Arkansas the best place to go to school and play in the SEC.

– Scoota has had a great year, no doubt. And I don't use the word great often. I'd like to think it means a little bit more to him. I have no complaints at all with him. He's a hard hat guy. That's how he plays and who he is.

– LSU is probably the best defense we'll have faced at this point. There's really not a weakness. We've had a week off to get some guys back who were banged up. I expect us to show out on Saturday night.

– I thought coach Morris put together a good plan for us. The rest of much-needed. We hooked it up in a scrimmage every day and got back into the flow of things. The guys worked really hard and they did some good individual work. Got on the road late last week and saw a high school game locally. It was good to get back healthy and prepare for the final few weeks.

– Last night, Connor Noland made a good read on an RPO and hit Koilan Jackson for a big play. Noah Gatlin and Ryan Winkel and Silas Robinson got some reps, too, and did well in the run game opening up holes. I was proud of the development from the young guys.

– This is a trophy game for us, and we're really looking forward to it. We've challenged the guys to go get it. It's a big deal to us and our fans as well. I remember growing up and watching Arkansas-LSU on Thanksgiving weekend. It's going to be a good challenge for us. They'll be juiced up coming in on Saturday off an emotional loss to Alabama.

– We're going to be very cognizant of Noland's redshirt and kind of play it by ear and see how it goes.

– It's an incredible night for seniors. I've been really, really pleased with the seniors on my side of the ball. Froholdt and Johnny Gibson have been vocal, and J-Red has been nothing but great to us and been there for us since Day 1. Jeremy Patton is going to finish out, too, and I can't thank them enough for what they've done.

– I really spent some time with my family on Saturday. My wife challenged me to do that. We are expecting our second child, possibly on Thursday. We grilled some steaks and watched some football.

– Froholdt is solid. He's fun to hang out with and be around. He's got a sense of humor about him. If anything from learning his culture or who he is, he's a tough, tough kid. Several times this year we were worried about him not getting up, and he did. He's done a good job pushing through some things. That's the mentality we want all of our guys to have. He wants to be there for his brothers, and he's a phenomenal kid. He's going to be successful no matter what he puts his mind to.