SEC FOOTBALL NO. 7 LSU AT ARKANSAS:

From Tide to Hogs: LSU familiar with bounce-back mode 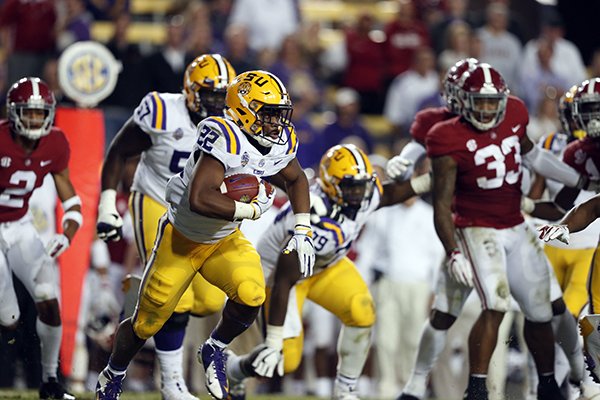 FAYETTEVILLE -- It's been the same story in Baton Rouge this time of the football season for the last five years.

The LSU Tigers are coming off a loss to mighty Alabama in a much-hyped game and preparing to face the Arkansas Razorbacks.

The Tigers (7-2, 4-2 SEC) fell from No. 3 to No. 7 Tuesday in the College Football Playoff rankings after losing their showdown for the SEC West title to No. 1 Alabama 29-0 at Tiger Stadium on Saturday.

Now comes the aftermath, also known as the Alabama hangover.

"This is a very big game for everybody involved in the state of Louisiana, but we have to let it go. We have the 24-hour rule and we have to press on to Arkansas and I do believe we're going to do that."

Orgeron's LSU teams have gone 2-0 against Arkansas -- a 33-10 victory in Baton Rouge last year and a 38-10 rout at Arkansas in 2016 -- and have looked sharp in bouncing back from losses to Alabama.

But in some of the previous four years -- since the Arkansas-LSU Thanksgiving weekend game was nixed -- some Tigers' teams did not recover well from the physical beatings against Alabama and took it on the chin the following week from the Razorbacks.

The Tigers were flying high at 7-0 in 2015 and ranked No. 2 before losing 30-16 at No. 4 Alabama. The following week, unranked Arkansas, which had previously lost at home to Toledo and Texas Tech, put a 31-14 whipping on No. 9 LSU in the Tigers' Death Valley, the middle game of a three-game losing streak that almost cost Coach Les Miles his job.

Then there's the 2014 game at Reynolds Razorback Stadium. The week after No. 16 LSU lost 20-13 at home to the Crimson Tide, the Tigers absorbed a 17-0 loss to the Razorbacks, snapping Arkansas' 17-game losing streak in SEC games.

The weather was cold, wet and cruddy for that game on Nov. 15, and the Tigers did not handle the conditions well at all.

The forecast for Saturday's game is not that bleak, but it is expected to be cold.

The first overnight freeze of the season is expected Friday night, and the forecast calls for a game-day high of 48 degrees before dropping to 32 degrees overnight.

Orgeron was asked Monday about facing a struggling Arkansas team in a game that "is probably going to be the exact opposite of last week in terms of hype and excitement and it's going to be pretty cold up there."

"We're going to prepare for this team," Orgeron said. "We've got to play in any elements. We went to play in the elements in Auburn, Alabama. It's a different element, obviously, but we got to be mentally tough.

"This team's got to be mentally tough. We got a lot to play for. This is a big game for us in terms of where we want to go, in terms of how strong we can finish and in terms of if we do finish strong were we can end up, the things that we can do, so there's a lot of great things."

Orgeron admitted he and his staff will have to work this week to lift the Tigers back up.

"But really these guys will bounce back," Orgeron said. "We're going to take it one game at a time, but if we do the things that we need to do we can have an outstanding season and I think as the week goes on they're going to bounce back. I want to have a 24-hour rule and hopefully it only takes 24 hours. This one may take a little bit more."

LSU has a 7-0 record after losses under Orgeron, and have not lost two games in a row since falling in three consecutive games in November 2015.

The Tigers are tied for second in the nation with 15 interceptions, including five by safety Grant Delpit. Safety Todd Harris Jr. had a diving interception against Tua Tagovailoa last week, the first thrown by the Alabama sophomore this season.

"They are a really good defense, probably the best we've faced to this point," Arkansas offensive coordinator Joe Craddock said. "You try to find a weak link and there's really not one."

The Tigers have fallen into an offensive rut since torching Ole Miss for 573 total yards in a 45-16 rout on Sept. 29. LSU has gone 2-2 in its last four games and averaged 320.3 yards per game against Florida, Georgia, Mississippi State and Alabama.

"They are a very talented team," Arkansas defensive coordinator John Chavis said. "No doubt at this time they're one of the top one, two, three teams in this league. I think they've earned the right to have that conversation."

While LSU played a more competitive game against Alabama than Arkansas did in a 65-31 loss, the Tigers' shutout and 196 total yards against the Crimson Tide is reason for concern since the Razorbacks had 405 yards against the top-ranked team.

A reporter pointed out to Orgeron that Arkansas scored 31 points, Tennessee had 21 and Texas A&M 23 against Alabama and asked if he was disappointed in the Tigers' offense.

"Very," Orgeron said. 'We're all disappointed, no question. And again, we could have coached better, we could have executed better, line of scrimmage struggled at times. We got to get them more help."