SEC FOOTBALL NO. 7 LSU AT ARKANSAS:

Warrior in his blood: Football journey not over for Hogs' Froholdt 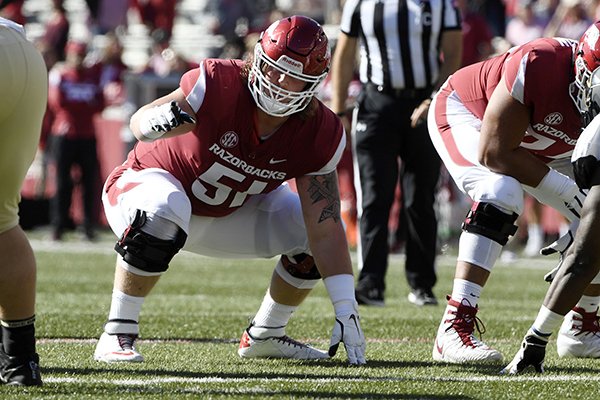 Arkansas offensive linemen Hjalte Froholdt gets ready to run a play against Vanderbilt in the first half of an NCAA college football game Saturday, Oct. 27, 2018, in Fayetteville, Ark. (AP Photo/Michael Woods)

FAYETTEVILLE -- Educated Arkansas Razorbacks fans know Hjalte Froholdt grew up in Denmark before coming to America, and that he plays the offensive line with a warrior mentality.

As it turns out, the Razorbacks' Danish offensive team captain can stake a claim to having some warrior blood in his background.

His mother Lisa grew up in New Zealand and her family has roots in Tonga, an archipelago in the South Pacific.

Froholdt wears that connection on his left shoulder and down his arm as an intricate warrior-style tattoo.

"My mom's side of the family, they're from Tonga," Froholdt said. "It's a Polynesian island. So it's a Tongan tattoo."

Froholdt, a 6-5, 315-pound left guard with 34 consecutive starts, and offensive line mates Johnny Gibson and Brian Wallace will play their final home games as Razorbacks on Saturday against LSU.

"It's gone by quick," Froholdt said. "Everyone says it. You don't think it's going to come by quick, but all of a sudden here you are playing the last game in Razorback Stadium. Yeah, a little emotional."

Froholdt switched positions from being a defensive lineman in his freshman season of 2015 to becoming a starting left guard the next year. The Razorbacks' football fortunes took a downward turn his junior and senior seasons, but it hasn't kept the smiling Dane from having a big time in college.

"It's a long journey," Froholdt said. "Of course there have been bumps in the road and everything, but I'm happy I made the decision to come here. Made the switch over to O-line and everything. I'm happy to be a Razorback."

Froholdt's life journey from Denmark to Ohio to Florida and on to the Arkansas campus has been full of rich experiences.

He fell in love with American football as a school kid in Denmark and started his own club with a handful of like-minded boys. As an older teen, he passed on playing Under-19 football and played up for the Gold Diggers, a "seniors" team of players made up of 20- to 40-year olds.

"We played all across Denmark," Froholdt said at SEC media days in July. "It was tough. I was young in my career and playing with grown men was definitely hard. That grown man strength is a real thing."

Froholdt still had another rude awakening waiting for him in America, when his first ambition fell through.

"When I was younger, I have all these thoughts in my head I wanted to accomplish," he said. "When I was a kid in kindergarten, I wanted to become a thief in France. And when that didn't happen -- it's not preferred -- I thought I had to do something different.

"So I thought I wanted to be an exchange student in America and have the whole American experience. It's been a pretty cool experience so far."

Froholdt's father Hans, who runs a ferry service that carries passengers between Denmark and Sweden, was well off enough to send Hjalte to America as an exchange student. He first landed in Ohio as an exchange student and wanted to make friends so he got into football at Warren G. Harding High.

"It was an exciting time," he said. "I came over, landed that day, started camp, got destroyed. I was put on my butt way too many times to count. It was a culture shock, but it was definitely a positive one."

Froholdt signed with Arkansas out of IMG Academy in Florida. After his one season on the defensive line, he studied with Frank Ragnow, who developed into an All-American center and a first-round NFL Draft pick, and got intensive on-the-job training in 2016, his first year as a left guard. Froholdt began his long streak of starts, which leads the Arkansas offensive players, and began a streak of 745 snaps of pass protection without allowing a sack before giving one up late in the fourth quarter against Ole Miss three weeks ago.

Froholdt took his position seriously enough that when Ragnow was lost for the season in 2017 following an injury in Week 7 against Auburn, he assumed a leadership role for the front.

"It's crazy," Gibson said. "When he got here he was just an athlete. Young and strong, and he's still all that, but the thing about Hjalte is he's turned into a more vocal leader.

"It all started for him becoming a true leader when Frank went down after the Auburn game. He understood, 'I have to say something. I have to have some words.' Since that week, it just seems I've been watching him turn more and more into a leader. From where he started learning the position to where he is now, it's been amazing to watch."

First-year Coach Chad Morris and his staff have been thankful to have a player of Froholdt's quality this season.

"He was voted a team captain by his peers, which is huge," Morris said. "I think that says enough about what he means in our locker room.

"On the field as an offensive lineman, if your name's not being called that's a good thing. But he has definitely backed that up. Just his toughness, his leadership style, his ability to communicate and help those younger guys ... and what he demands in the meeting rooms, too. His work ethic, his demeanor, has not changed through the course of this season. He's been very, very rock solid and that's why you've got respect for him."

Offensive coordinator Joe Craddock said Froholdt is a solid leader who is fun to hang around.

"He's just a good guy to be around," Craddock said. "He's kind of funny. He has a sense of humor about him. I think he's a guy that other guys want to flock to. He's that kind of leader."

Craddock said he and offensive line coach Dustin Fry have noticed that a huge part of Froholdt's makeup is his toughness.

"He's a tough, tough kid," he said. "I mean, there have been several times this year we were worried about him not being able to get up after getting rolled up on or whatever it may be. I remember several times sitting next to Coach Fry and him saying, 'Get up, Hjalte. Get up.' And he got up. So he's just tough.

'He's been bruised up and all those things and he's really done a good job of just pushing through. That's the kind of mentality we want our whole team to gravitate towards because it's football, you're going to get hurt."

Froholdt said he's absorbed more American culture than he has tried to pass along Danish or New Zealand traditions.

"I've just tried to assimilate more to here," he said. "I'm always open to explain my culture and what we believe in and how we are, but in the end, but ... I'm not here to tell people what to believe in or what kind of government or religion or whatever it is.

"I've been in Ohio, been in Florida and now here in Arkansas. At the university, you've got guys from everywhere, but it's been awesome, that's for sure. They've been welcoming with open arms, even though I'm a weird foreign kid. They've been awesome."