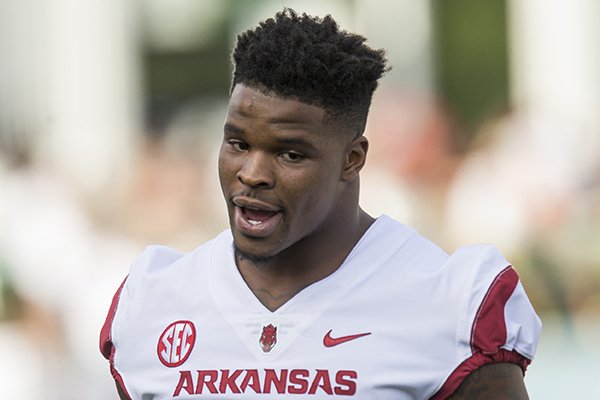 FAYETTEVILLE -- Some University of Arkansas seniors have gone through three position coaches in their football careers.

The seniors have been on either two or three bowl teams.

Some enjoyed participating in a 31-7 beatdown of Texas in the Texas Bowl. All were part of a 45-23 victory over Kansas State in the Liberty Bowl as well as a 35-24 loss to Virginia Tech in the Belk Bowl when the Razorbacks blew a 24-0 halftime lead.

The Razorbacks lost at Colorado State and to North Texas this season, but got their first shutout since 2014 with a 23-0 victory over Tulsa.

"Life is going to hit you with obstacles, ups and downs, like a roller coaster. But at the end of the day if you keep moving, you'll be all right."

This season has been mostly downs for Arkansas (2-7, 0-5 SEC) going into Saturday's 6:30 p.m. game against LSU, but the Razorbacks are hoping to pull an upset in the final home appearance for 15 seniors.

"This means everything to me," senior safety Santos Ramirez said. "Just with being a senior, just what I came through man. I know this hasn't been the best year for me or for the team. I just want to go out there and give everything I've got the last time I can at home.

"There's no better opponent to do it against than LSU. This is our bowl game, that's how I'm looking at it. I'm coming out there with a passion like no other."

• The 15 seniors who will be honored before Saturday night’s game against LSU:

Morris said he has become close to the seniors in his one lone season.

"We spend a lot of time together and I try to bring them a message each week that will help them both on the field and off the field," Morris said. "Just talks about the struggles and trials that we've been through and how to remain consistent and persistent in the way you approach things that'll help you through your everyday life.

"We've had an open dialogue. It's been very challenging with everybody with the year that we've had, but these guys have stayed the course."

Morris said with the amount of change the seniors have gone through, it hasn't been easy for them to adjust to new coaches. There have been 27 coaches on staff since 2014, including three offensive and three defensive coordinators.

"We've worked extremely hard building a trust among each other and it's only grown stronger with time," Morris said. "I really think that's why we've been able to see some of the progress that we've made."

Arkansas has three senior starters on the offensive line with guards Hjalte Froholdt and Johnny Gibson and tackle Brian Wallace.

"Whenever you go through all the things we have as a senior group, you figure out who really sticks together," Froholdt said. "I'm proud of my fellow seniors. There's a bunch of really good, strong leaders on this team and good players and I'm happy this is my senior class.

"Unfortunately, the result this year is not what we wanted, but we're doing everything we can to end this season on a positive."

Gibson was a walk-on from Dumas who was put on scholarship before the Belk Bowl two years ago.

"It's been crazy," Gibson said. "I get here and I'm thinking, 'Will I ever play? Will I be a scout teamer all four years here?' "

Gibson got his first start against Florida in 2016, helping the Razorbacks upset the No. 11 Gators 31-10 after a bye week.

"Coach B said during the bye week, 'If you feel you can do something better than someone who is in front of you, just come to me and say so,' " Gibson said. "I was thinking about saying something and my mama told me, 'Go say something,' and I did. I got a shot and I've been running with it ever since."

Gibson and Wallace will each make their 27th start on Saturday night. It will be the 35th consecutive start for Froholdt.

"It's weird knowing you're not going to be able to suit up in that stadium again after this game, and run out the 'A' and hear those Hog calls," Froholdt said. "But I'm excited for the last game. There's going to be a lot of hype around it."

Senior receiver Jared Cornelius missed the last game against Vanderbilt due to an ankle injury, but he's expected to be in the lineup against LSU.

Senior starters on defense along with Greenlaw and Ramirez have been tackle Amon Watts, end Randy Ramsey and nickel back Kevin Richardson. Watts leads the team with 5.5 sacks.

"It's always a special time," defensive coordinator John Chavis said. "A special time for the program, but for these young men it's truly a special time. It's the last time they'll get to go into this stadium and wear that logo on the side of their helmet and represent Arkansas."

Greenlaw, who played at Fayetteville High School, was in foster care for six years before being taken into the home of Brian and Nanci Early when he was 14. He officially became their adoptive son in July.

"If I hadn't gone through what I've been through and got some understanding and knowledge out of that situation, it definitely would have been a tougher ride for me here," Greenlaw said. "You learn to deal with things that are out of your control ... make the situation as good as possible."

Greenlaw, who has 300 tackles in 36 starts, said he appreciates being able to remain in Fayetteville for his college career.

"Fayetteville is home," he said. "It's been home for me for a while.

Ramirez said the seniors have formed a strong bond, calling them his brothers.

"We've been through a lot, and we really have become close," he said. "At the end of the day, we're really all we've got.

"Everything may change around us, and our environments may change, but we've still got each other.

"These are going to be the guys I'm going to count on down the line in my life. I've developed some great friends here, man, and I'm glad I got to experience this."

NO. 7 LSU AT ARKANSAS