LSU’s team speed gets to the Boot faster 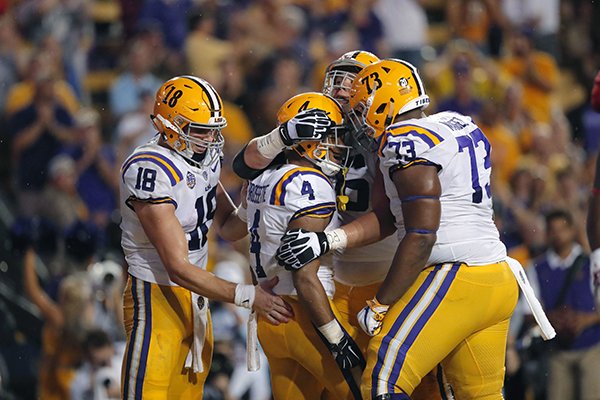 LSU running back Nick Brossette (4) is congratulated by teammates after his touchdown carry in the first half of an NCAA college football game against Mississippi in Baton Rouge, La., Saturday, Sept. 29, 2018. (AP Photo/Gerald Herbert)

A total of seven SEC teams are already bowl eligible, with four more needing just one victory and have that picture clear up a bit this weekend. There is a lot of parity in the SEC if you take Alabama out of the picture.

The University of Arkansas gets a rare night game, and with temperatures in the mid to high 40s, it won’t be full.

Had an exceptional week pick games, going 7-1 and would have been perfect if Ole Miss’ defense was a little better. Season record is 67-23. Here are this week’s picks:

The Tigers are not supposed to have an Alabama hangover, but getting shut out at home can do funny things to a team. The LSU offense was No. 60 in the nation before last Saturday when pedestrian became a stop sign. The Tigers are No. 103 in total offense now. The Razorbacks had an extra week to get well and prepare for this game. While it is the Battle for the Golden Boot, the Hogs may not have the speed to get to the trophy. LSU 24-17

Someone gets bowl eligible, and it may be the team who gets the ball last. Both teams have potent offenses and defenses that aren’t always solid. The Chanticleers are coming off a home loss to Appalachian State and should be up for the challenge. The Red Wolves have won back-to-back games once this season and that was Tulsa and UNLV whose teams are a combined 4-14. Now is the right time to put it all together for the Red Wolves. Arkansas State 38-35

Defense has carried the Bulldogs, and they have given up the fewest points in the SEC this season. The Dogs have allowed just 111 points, the Tide 127 (31 by the Razorbacks), but the Bulldogs, like the rest of the nation, have not faced an offense like the Tide, who have scored 462 points in nine games. Alabama 49-24

This is going to have a bunch in the Tigers Nation wishing they were in the rear-view mirror of the Gus Bus. The teams are pretty even defensively, but the Bulldogs have a much more potent offense. The last time these two teams played, in the SEC Championship Game, a berth in the playoffs was on the line. Georgia is in the hunt again. Georgia 38-27

This one is for sole possession of third place in the SEC East. The Gamecocks need one victory to get bowl eligible, but the Gators are better than expected and it is in the Swamp, so the Gamecocks have to wait a week to get their final victory of the season against Tennessee-Chattanooga. Florida 31-21

A Wildcats victory might not ease the hurting after the basketball team got whipped by Duke, but it would give them some rare air, a second-place finish in the East. The Vols need two victories to be bowl eligible but may not make it with Missouri up next. The Wildcats’ defense is really good. Kentucky 24-17

The Rebels’ defense is last in the SEC in points allowed, giving up 325 and the Aggies have some big-play potential. As much as the heart says pick the Rebels, the head says otherwise in College Station. Texas A&M 38-27

The Tigers are another team needing one victory to get to a bowl, and the Commodores may not have an answer for Drew Lock. The Commodores are looking like a team that gets a bowl because of their APR. Missouri 42-31