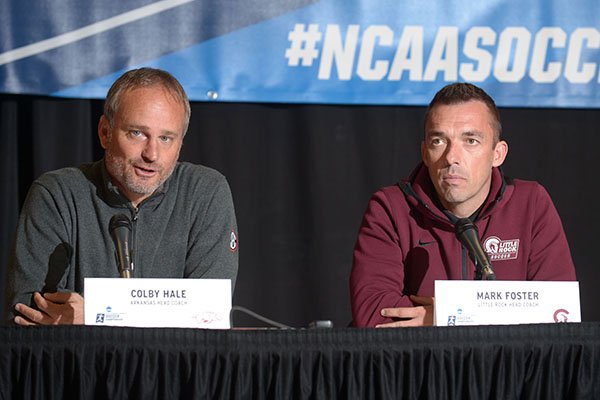 Sports fans will get to see the University of Arkansas battle an in-state foe in a postseason game tonight for the first time since 2005.

The Arkansas soccer team earned an at-large berth Monday into the 2018 NCAA Division I Women's Soccer Tournament for the fifth time in six years. The Razorbacks' first-round draw was none other than the University of Arkansas at Little Rock, the Sun Belt Conference champion.

"What an exciting matchup," Arkansas Coach Colby Hale said. "The NCAA Tournament will always generate interest, but when you're playing someone that you don't normally have an opportunity to play, it makes it that much more special. This is about a state that loves its college athletics, and I think this is going to be a big event."

Arkansas, one of nine SEC teams selected for this year's tournament, is coming off a strong SEC Tournament run where it lost to LSU on penalty kicks in the championship game.

Except for an exhibition baseball game this fall against UALR, the only other times Arkansas has previously played Division I in-state opponents has been in the postseason. Arkansas defeated UALR in the 1997 NCAA Volleyball Tournament. The Razorbacks also defeated Arkansas State University in the 1987 men's NIT Basketball Tournament in Fayetteville and were tripped up by ASU in Jonesboro during the 2005 Women's NIT.

The Arkansas baseball team is scheduled to host UALR and the University of Arkansas at Pine Bluff for regular-season games in the spring.

"This is definitely something to look forward to as far as the travel and for the interest of the fans," UALR Coach Mark Foster said. "Everyone around here is excited. It's really fantastic for both schools."

This is the second time the Razorbacks have hosted an NCAA Tournament game, following a 2-1 overtime victory over Memphis in 2016.

Arkansas is 9-0-1 at home this season, the lone blemish coming on a 1-1 double-overtime tie with Providence.

"Getting a chance to host is big for a lot of reasons," Hale said. "Not having to travel will be big from a competitive standpoint. We know how big our fans are and how big of a home field advantage this is. I can't imagine anyone was hoping for the 'at Arkansas' draw.

"Mark has created an environment in Little Rock, where they play some really good soccer and have some toughness about them. We know this is going to be a huge challenge for us, but I'm really looking forward to it."

UALR has outscored its opponents 40-15 this season, with senior Jaclyn Purvine scoring 12 of those goals, including six game-winners. Senior Arola Aparicio Gili has added seven goals.

"We're extremely fortunate to make it this far, and I'm real excited for our 10 seniors who have the opportunity to end their college careers in the national tournament," Foster said. "We know the Razorbacks are No. 1 in the state and will always be No. 1 -- they are everybody's favorite team. But this is a great opportunity for our team and we wanted this game badly. I don't think we'll go in scared."

The teams' lone common opponent the two teams had this year was Kentucky, who the Razorbacks shut out 4-0. The Wildcats beat UALR 3-2 in double-overtime.

The winner of tonight's game will face the winner of Texas-Virginia Tech at a site and date to be determined.