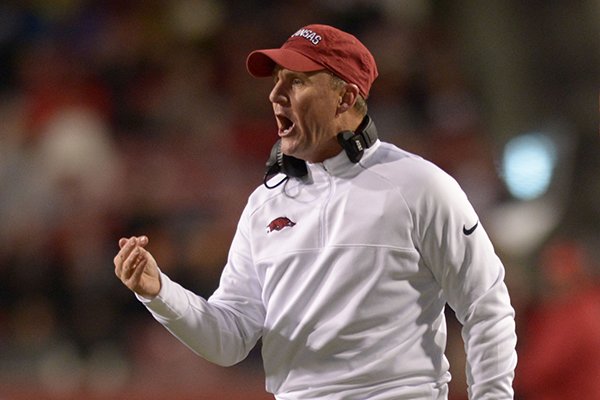 Arkansas coach Chad Morris speaks to his players as they come off the field against LSU Saturday, Nov. 10, 2018, during the second quarter of play at Razorback Stadium. Visit nwadg.com/photos to see more photographs from the game.

– Our atmosphere was great and passion was high on Saturday night. You could just feel it from the Hog Walk to to game, it was incredible.

– This team continues to fight to the end. Offensively we competed hard. LSU didn't do anything different than what we prepared for all week long. I didn't think that was our best performance as a group and we couldn't get the run game going. Grit and toughness and ability to fight gave us a chance late. I'm thankful for their fight.

– Defensively the guys fought. We had guys flying all over the field. Kam Curl and Santos Ramirez "tackled extremely well" and played very physical in the run game. We gave ourselves a chance. We are seeing some improvements.

– This will be our first true road test since Sept. 22. Joe Moorhead is doing a good job there. This will be the fastest defense we've seen so far, and they are very pressure oriented. Montez Sweat is a dynamic player and very disruptive. A lot of Nick Fitzgerald's runs are off RPOs, and he does some good things there. They also protect the football well.

– Rakeem Boyd and Devwah Whaley were at practice last night. Morris said he expects them both to be back, as well as De'Vion Warren, who did not play against LSU. Deon Edwards (ankle) is going to be alright.

– Moorhead has done a good job adapting to the personnel he has. He's been innovative and taking advantage of Fitzgerald, who sees the field well. Fitzgerald is big, physical and runs downhill. We have to tackle and be gap sound. He's patient as he gets into his run game.

– I haven't been to Mississippi State, but everyone I know who has been there says it's loud. We'll prepare the guys for that environment over the next couple of days.

– On C.J. O'Grady's 14 targets: We were trying to get the bigger-body guy the ball. You always like to distribute the ball around, but we definitely wanted to get O'Grady the ball. No other receiver had more than five targets in the game.

– You want to get the ball to the edge through speed sweeps or quick screens. You've got to be able to hat those up and block them right, too.

– It was extremely impressive the amount of recruits we had on campus this weekend. We had some very elite players here and I'm glad they got to be here for Saturday's atmosphere.

– There is a chance Connor Noland and John Stephen Jones could play in the last two games. If the game sets up just right then there is a possibility, yes.

– It was a good game Saturday night, and I can't wait to get it to where it's packed. We have to get this program back to that. We didn't get done what needed to get done. Couple of things we can point to: we busted coverage in the first half, and the 2nd and 17 play where we're called for targeting. It kept the drive alive and they ended up scoring.

– It starts with Fitzgerald and they've got a lot of pieces back. But he's a quality quarterback and he makes that offense go. They have two tailbacks who can really go, and they're pretty similar. What they do with some of the motions and formations, it's hard to tell what's going on sometimes. We will show up and play, and we're looking forward to it.

– They have put together a scheme and readjusted, but Moorhead has done a good job. Never coached against him, but he did a great job at Penn State and in Starkville. They run the ball well and take advantage of throwing the ball down the field.

– The fans down there make it tough on opposing teams. I've always said it can be easier to communicate on the road because the fans aren't going to be too loud when their offense is on the field.

– On Hayden Henry: There were a couple of plays where he was a little lost, but other than that he played super. We look for him to be a player in the future that can play multiple roles. We will be in a lot more Nickel defense this week because of their open sets.

– I think Fitzgerald has tremendous speed. From set-go he may not be the fastest guy, but he has run away from a lot of defenses and great defensive backs. He plays the game fast. I'd like to take him and make him a defensive end, he said with a grin.

– I think Armon Watts has played his way into some NFL looks. I know he'll finish this season out strong, and there will be more football ahead of him, no doubt.

– We started really slow and it was tough to find anything early on. We were able to find some things in the fourth quarter and make it close late. Wish we would have come out and played better and called the game better early. We never really could get into a rhythm and C.J. O'Grady made some plays for us.

– I have a really tough wife so I don't have to worry about many things at home. I was worried about us and trying to beat a top-10 team. She is unbelievable and kept everything in line last week. We had a few complications at the hospital. It was a tough week with not a lot of sleep, but I knew we had a tough opponent and had to get the guys ready to go.

– I was hoping to get Devwah back last week, but getting him back would help us get the ground game going. Craddock called Boyd's injury "more of a scare than anything else." LSU was able to win at the point of attack a lot. We have to focus on ourselves. Chase Hayden and Maleek Williams are available if need be. Want to get Maleek more involved, but the other backs were most in-tuned with pass protection.

– A lot of what we do is non-verbal. I'm not worried about getting our calls in. As long as they don't fog up the stadium or turn the lights off we'll be able to get our calls in.