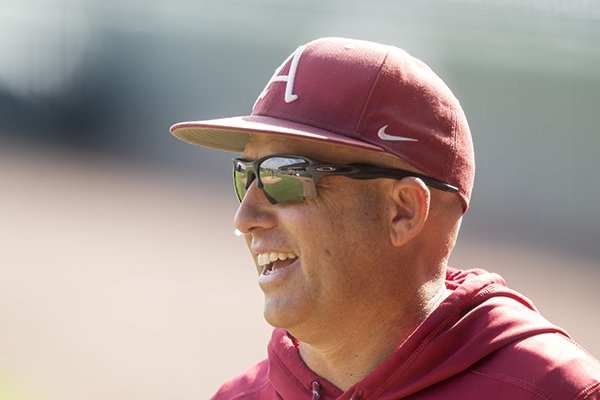 Johnson is expected to be hired by the Minnesota Twins, multiple sources told WholeHogSports on Thursday. The Athletic first reported Johnson would become the organization's pitching coach under new manager Rocco Baldelli.

The Twins have not officially announced the hire, but Arkansas coach Dave Van Horn released a statement Thursday confirming Johnson, a Sherwood native, would leave the Razorbacks for a job in Major League Baseball.

"I can’t say enough about the amazing job Wes has done for our program over the last two years," Van Horn said in a release. "I knew Wes was the right fit for our program when I hired him and he brought his passion for the game and for the Razorbacks every single day. Wes’ energy and tireless work ethic was infectious from our players to our staff.

"I know he had a positive impact on everyone he worked with and every aspect of our program. I’m excited for him, personally and professionally, and I know this is a once in a lifetime opportunity for him."

Johnson did not return a phone call seeking comment.

A source said Johnson has received interest from multiple professional teams this off-season, including the Seattle Mariners and the Los Angeles Angels. Another source called the move "sudden."

According to Baseball America, Johnson would be the first college coach to go directly to an MLB dugout since Florida State coach Dick Howser was hired as the manager of the New York Yankees in 1980.

Arkansas gave Johnson a $30,000 raise in July that increased his annual pay to $230,400, and he had incentives that would pay him up to $307,200, according to an agenda for this week's meeting of the University of Arkansas Board of Trustees in Fort Smith.

According to D1Baseball.com, the Twins' offer was "well north of $350,000" per year for multiple years.

“It was hard for him and obviously we tried to keep him, but he just had to make a decision and honestly I think it was a tough one for him,” Van Horn said in a phone interview.

“It seems like this is going on a little bit with some major league teams. They’re coming in and getting some of the coaches from college and I think it’s because of some analytics that are going on and they know Wes is a good teacher.”

Johnson has spent the past two seasons with the Razorbacks and has been credited with the development of several high-round draft picks and prospects, including Blaine Knight, Trevor Stephan, Kacey Murphy, Isaiah Campbell and Matt Cronin. He previously worked on staffs at Mississippi State and Dallas Baptist, and each of his teams have made it as far as the NCAA super regional. Arkansas was NCAA runner-up earlier this year.

This is the second time Johnson has left a program after the completion of fall baseball practices. He was hired at Mississippi State on Oct. 30, 2015, when former MSU pitching coach Butch Thompson accepted the head coaching job at Auburn.

"I'm a man of faith and I go places and do things more than the world or the average person thinks I should do or shouldn't do," Johnson said in May of the timing of his move from Dallas Baptist to Mississippi State.

Johnson is known for developing power pitchers. His two Arkansas staffs finished with a combined 1,238 strikeouts in 133 games, and several Razorbacks saw significant increases to the velocity of their pitches as a result of Johnson's emphasis on lower-body workouts and pitch-mechanic analytics.

At Johnson's urging, prior to the 2017 season Arkansas installed a radar system called TrackMan that records and analyzes 46 data points for pitchers on every pitch.

“If you get into biomechanics, you find out really fast that a pitcher cannot repeat his delivery," Johnson told WholeHogSports in 2017. "You’ve got over 600 muscles in the body. To think that the roughly 240 that we use in pitching are going to fire at the same time - you’ve got a better chance at winning the lottery. TrackMan gives me a chance to show guys a consistent release height and some things we can repeat."

Johnson's two-year stint is the shortest for any pitching coach under Van Horn, who is entering his 17th season at Arkansas. Johnson replaced Dave Jorn as the Razorbacks' pitching coach in 2016 when Jorn retired following 14 seasons on the job.

“I’m getting on it as quick as I can," Van Horn said of the search for Johnson's replacement. "There are a lot of good candidates out there, but obviously it’s bad timing for just about anybody that I would go after because they’re probably working at a Division-I school right now. There are even some professional guys that would like to come in here that are in the minor leagues or pitching coordinators from different areas.

"I just want to get the right person and whether it’s going to take three days or three weeks, I don’t know, to be honest with you. We’ll just try to do the best job we can."

Johnson's move comes during the middle of the early signing period for high school baseball players. He had been credited as a factor in several pitchers committing to Arkansas, such as Springdale Har-Ber right-hander Blake Adams, Perfect Game's No. 85 recruit who signed with the Razorbacks on Wednesday.

"I just really connected with him," Adams said Wednesday at his signing ceremony.

Tom Murphy and Chip Souza contributed to this report