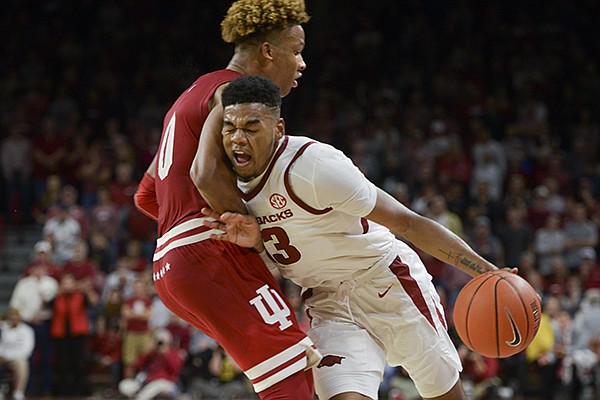 The junior college transfer was turning the ball over left and right, according to Anderson, but Sunday, in his first primetime game in Bud Walton Arena, Jones turned in a flawless floor game in Arkansas' thrilling 73-72 win over Indiana.

Jones, who naturally entered the postgame press conference smoothie in hand, finished with 11 points and seven assists without a turnover in a team-high 38 minutes.

"It was much better," Anderson said. "I mean, it’s better than it was in practice, I’m going to tell you that. So maybe he’s learning. Last day of practice, I was going to give him an apple turnover. I guess the game brings on a different mindset. He played well."

Jones entered the game with six turnovers in Arkansas' first two games, including four in the Razorbacks' season-opening loss to Texas, against just five assists. His turnover against the Longhorns' full-court pressure in the final minute of regulation set up Texas guard Kerwin Roach's game-tying 3 with one second remaining to force overtime.

There was none of that from Jones against the Hoosiers. In fact, he became the first Arkansas player to finish with seven assists and zero turnovers in 35-plus minutes since Julysses Nobles did so in a 98-88 win over Mississippi State in Jan. 2012.

“I didn’t score like I wanted to, but I knew I could penetrate and get Dan the ball,” Jones said. “Every time I was driving they were helping on me, so I knew Dan was going to be open backside. I just knew my shot wasn’t going today, so I wanted to find other things to do today.

"I am always good at rebounding, but I wanted to add assists to it as well. Seven assists to zero turnovers is a pretty good game, but there are things I need to work on. I'll get back in the lab.”

Jones grabbed five rebounds in the win as well and arguably the biggest of the game by an Arkansas player. Following a pair of point-blank misses in the game's final seconds, Jones grabbed the loose ball in traffic and was, inexplicably, fouled by Hoosiers forward De'Ron Davis with the game tied 72-72 with 2.5 seconds to play.

Jones confidently hit the first free throw to give Arkansas a one-point lead, and after an Indiana timeout, Jones missed the second. All went according to plan, Jones and Anderson said following the game, and the Razorbacks escaped with their first resume-building win of the young season.

"He got in the mix of it and he got up there and knocked the first one down," Anderson said. "Then he missed the perfect free throw. That’s what he missed."

Following his career-high 21-point outing in Monday's 81-58 win over UC Davis, Jones didn't shoot the ball especially well against Indiana. He finished just 3 of 8 from the floor and 1 of 4 from 3-point range, but a key rebound late and an at-times brilliant passing display stood out.

"Coach A will vouch for this, he like leads the team in turnovers in practice," a laughing Gafford said of Jones. "For him to step up and have seven assists and no turnovers is big. Especially for him to come in and grab a tough rebound like he did at the end.

"Props to Mason because he is a hard worker.”