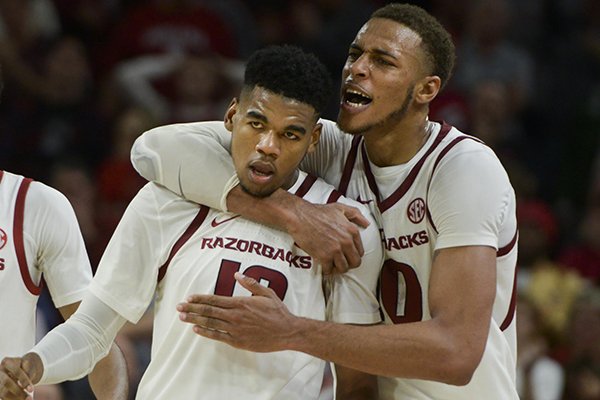 Arkansas basketball players Mason Jones (left) and Daniel Gafford embrace during a game against Indiana on Sunday, Nov. 18, 2018, in Fayetteville.

FAYETTEVILLE — An overtime loss in the season opener might have proved instrumental for Arkansas in a narrow win against Indiana.

The Razorbacks squandered a late lead in a 73-71 overtime loss to Texas, and the same fate loomed large again Sunday as the Hoosiers erased a double-digit Arkansas lead in the second half.

This time, the Razorbacks (2-1) found a way to hang on as Mason Jones' free throw with 2.5 seconds left provided Arkansas a 73-72 win in the Hardwood Showcase.

Daniel Gafford scored a career-high 27 points for Arkansas, but it was Mason who delivered the big rebound and free throw that secured the win. It was a little redemption for Mason, who missed the front end of a one-and one with 1:01 left and Arkansas clinging to a 72-69 lead.

"I knew I was going to make that free throw," Mason said. "I like the pressure."

In a similar situation against Texas, Mason missed a late shot and Texas rallied to tie and force overtime. Mason said Arkansas coach Mike Anderson told him he'd get another chance, and Sunday it presented itself.

"We learned a lot from that Texas game," Jones said. "I just knew to be ready when the chance came again and I was ready this time."

Indiana (3-1) had a chance to take the lead with under 15 seconds left, but two shots under the Hoosiers' basket would not fall and Jones rebounded the second miss and was fouled by De'Ron Davis with 2.5 seconds left. It was a foul Indiana coach Archie Miller did not totally agree with.

"We had a shot to win the game, had a tap to win the game and had an unfortunate call that put them on the line," Miller said. "It was a 50-50 play. I don't know if he fouled him or not, but I know it was a tough call."

Jones hauled in the key rebound, but Gafford did not let Jones take all the credit in the post-game interviews.

"I tipped that rebound out, by the way," Gafford laughed.

Jones made the first free throw to give Arkansas a 73-72 lead. Indiana called a time out after Jones' free throw, and Anderson instructed Jones to deliberately miss the second free throw.

"I have been harping on guys to make free throws, so asking him to miss one, I don't remember asking a player to miss a free throw in a while," Anderson said. "It was a perfect miss."

Indiana only had time for a desperation heave as the buzzer sounded.

Arkansas rode the second half play of Gafford, who also grabbed 11 rebounds. At one stretch in the second half, Gafford scored 10 straight Arkansas points to help the Razorbacks hold on against a furious Indiana rally.

"I wasn't playing weak like I usually do," Gafford, who passed up entering the NBA Draft to return to Arkansas for his sophomore season, said. "Today I let the game come to me instead of trying to just go and take it. Letting the game come to you, it comes more smooth."

Anderson said Gafford was a force at both ends, as his blocked shot just seconds after the opening tip set an early tone.

Miller said his team would benefit from playing against Gafford later in the season.

"He's a very good player," Miller said. "He was a really tough handle for us today. He pretty much neutralized the game. He was dominant. That is something that is going to help us moving forward and defending the caliber of big like that."

Indiana rallied with an 11-2 run fueled by freshman Romeo Langford, who finished with 22 points and 10 rebounds, and eventually took a 58-57 lead on Juwan Morgan's layup with 8:58 left.

Arkansas recaptured a five-point lead at 63-58 on Gafford's inside shot, before Indiana surged again to twice tie the game late.

Indiana: The Hoosiers played just eight players as they have battled some early season injuries. Six of the eight logged more than 20 minutes including Langford, who played 38 minutes.

Arkansas: The Razorbacks had all nine players reach the scoring column Sunday, getting contributions off the bench to help the scoring. Jones also delivered a huge performance with 11 points and seven assists without a turnover.

Arkansas appeared to be rolling to a big win when Jones completed a three-point play to give the Razorbacks a 10-point lead at 51-41 with 14:16 left. But the Hoosiers rallied by outscoring Arkansas 17-6 over the next five-plus minutes to take a 58-57 lead.

Juwan Morgan and Langford fueled the run, scoring nine of the Hoosiers' 17 points with Morgan's inside bucket giving Indiana the lead.

Langford is projected to be a high lottery pick in the 2019 NBA Draft, and he lived up to that lofty status Sunday. Langford a 6-foot-6 guard in just his fourth college basketball game, showed off a variety of skills with slashing drives and long range. His back-to-back 3-pointers in the second half helped Indiana erase a 10-point deficit.

This was just the third meeting between the two teams, and first since 2008 when Arkansas defeated Indiana in an NCAA Tournament game. . Arkansas is celebrating the 25th anniversary of its 1994 national championship under former coach Nolan Richardson. Anderson was a longtime assistant coach and former player for Richardson.

Indiana will return home Tuesday to host Texas-Arlington in the second game of the four-game Hardwood Showcase.

Arkansas will host Montana State on Wednesday in Bud Walton Arena in its third game of the Hardwood Showcase.