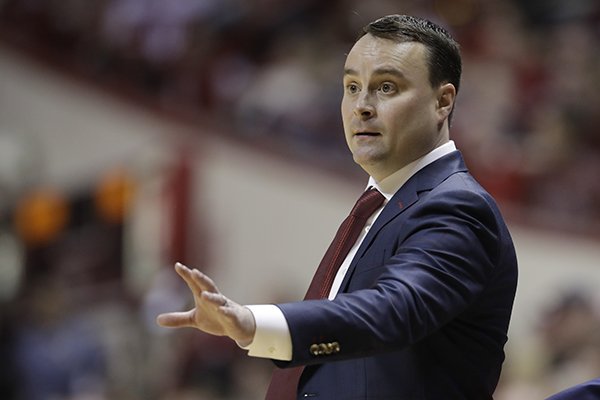 FAYETTEVILLE -- Indiana's basketball team is playing on the road against the University of Arkansas for the first time today, but Hoosiers Coach Archie Miller has brought a team into Walton Arena once before.

Miller, in his second season at Indiana, was Dayton's coach when the Razorbacks beat the Flyers 69-55 at home during the 2014-15 season.

"A true road game at Arkansas is going to be a really, really difficult environment," Miller said. "It's a difficult style to play against and prepare for. They make it hard on you."

Miller said it's particularly difficult to face the Razorbacks' defense in Walton Arena.

"It's not going to be one of those deals where you're going to be able as a coach to control the game, so to speak. They have to play."

The Razorbacks (1-1) will look to improve on a 63-2 record in Walton Arena against non-conference opponents under Coach Mike Anderson.

"I expect a great atmosphere," Anderson said of the crowd for today's game. "Razorback Nation will show up and show out."

Beating Indiana might top all of those victories considering the Hoosiers come into today's game after a 96-73 thrashing of No. 24 Marquette at home.

"They took it to a Marquette team that's ranked," Anderson said. "I said earlier I think Indiana is one of the better teams in the country. Coach Miller has gotten a chance to get in there and get some good talent."

Indiana is led by 6-6 freshman guard Romeo Langford, a McDonald's All-American from New Albany, Ind., who is averaging 17.7 points. He scored 22 points against Marquette.

"The Langford kid is a big get for them," Anderson said. "He's really athletic with bounce. He's got a great first step. He can finish with contact. He just has a great feel for the game.

"He's a pretty good player all around. He's one of those guys that could come out one-and-done [to the NBA]. Very, very talented."

Langford hit 8 of 15 shots against Marquette.

"He had some fantastic drives and finishes," Miller said. "I think you can see his explosiveness and the amount of ground he can cover.

"When he is driving and he's jumping, that's not a little guy jumping into you. He's going over the top of you and his length is startling sometimes around the basket in what he does."

The Razorbacks have their own high-flying star in 6-11 sophomore forward Daniel Gafford, who is projected to be an NBA lottery pick.

"He's probably the premier big guy in the country in terms of running to the rim," Miller said. "His north-south, 94-foot game is as good as it gets."

Gafford said the Razorbacks are looking forward to playing in front of a big crowd at home.

"We're going to come out and be ready to play and be ready to feed off the energy from all the fans," said Gafford, who is averaging 16.0 points and 8.0 rebounds. "We can't be nothing but ready for it."

Indiana will be the second major test in three games for the Razorbacks, who have nine newcomers and opened with a 73-71 loss to Texas at Fort Bliss in El Paso, Texas, and beat California-Davis 81-58 at home.

"Early in the year, it's a big game as we continue to try to develop this team," Anderson said. "But the only way they're going to learn is going through the tests that we play, and those are the games each and every time out.

"This is going to be a game-to-game situation with this team here."

If Arkansas beats Indiana it could be a major boost for the Razorbacks' postseason resume depending on how they do in SEC play.

"Every win is big for us, especially against somebody that's another Power 5 school," Harris said. "With them beating Marquette and with us getting a chance to beat them, it's pretty big."

Indiana's top scorers behind Langford are senior forwards Juwan Morgan and Evan Fitzner, who are both averaging 12.0 points.

Fitzner, a graduate transfer from Saint Mary's, scored 16 points in 18 minutes off the bench against Marquette. He hit 6 of 7 shots, including 4 of 4 on three-pointers.

"He's a terrific offensive player," Miller said. "He's got to continue to work a little bit more on the defensive side of the ball just in terms of his physicalness around the basket. He's got to get better at that.

"Without question he fits our style. I knew it from Day 1. He's a confident guy. He's not questioning what's going on. He's playing with great confidence."

"I think the game will get up and down the floor," Anderson said. "They're averaging 93 points a game, so they aren't holding the basketball. We're not going to hold it, either."