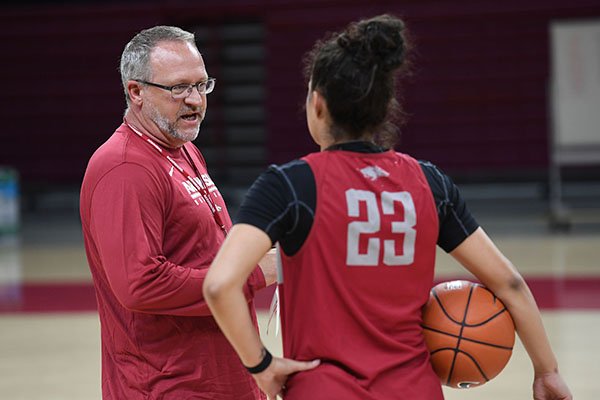 Instead, junior college transfer Alexis Tolefree drained a jumper as time expired to give Arkansas a hard-fought 66-65 win.

"No question about it," Neighbors said. " When adversity set in, we get down seven. It would probably ballooned to a 15-point deficit ... Instead they fight back. They claw back. We learned a lot but certainly not all rainbows and unicorns."

Tolefree and Malica Monk led Arkansas with 18 points each, while Chelsea Dungee, a transfer from Oklahoma, added 16 before fouling out late in the game.

But the Sun Devils' physical defensive pressure will present a great challenge even at home, Neighbors said. The Sun Devils (1-1) dominated the Razorbacks a year ago in an 89-43 win in Tempe, Ariz.

"They are the one team I dread seeing," Neighbors said. "I'm not gonna beat around the bush. They grind it. Every cut is contested. Every dribble is contested. It will be 40 minutes or beyond of everything being contested."

Arizona State comes into the game, after losing to No. 4 Baylor 65-59 a week ago. The Sun Devils led by 11 at halftime, but the Bears rallied, outscoring them 22-12 in the fourth quarter for the win.

The Razorbacks should get help from a nice home crowd as the women will play the second half of a big basketball doubleheader. The Arkansas men's team opens the day by hosting Indiana at 2:30 p.m., followed by the Arkansas-Arizona State women's game at 7.

"It's a great opportunity for five or 10 or 500 new people to see us," Neighbor said. It's a great day of basketball and I love being a part of it.

"I think our kids are excited about them being ranked and having an opportunity to knock off a ranked team. You're not a home team underdog very often and we certainly will be. I think they've embraced that."

Fans can take advantage of several promotions for the game. Kids 12-and-under get in free. In addition, fans can redeem their tickets to the men's game for complimentary admission to the women's game. Fans can also bring a canned food item to donate and get in for $2.