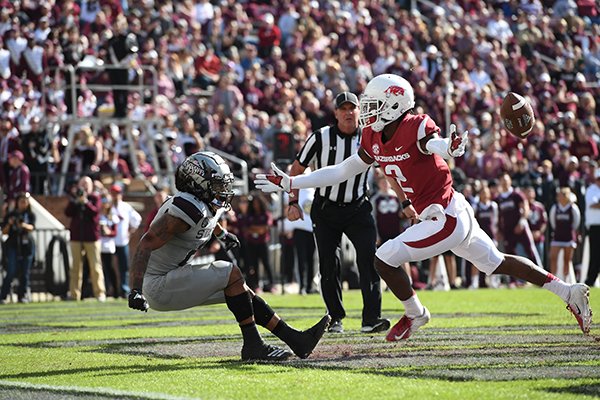 FAYETTEVILLE — Arkansas defensive backs Ryan Pulley and Kamren Curl have been suspended and are not expected to play in the Razorbacks' game at Missouri on Friday.

Pulley and Curl were identified as the Arkansas players who were socializing with members of Mississippi State's dance team prior to the Razorbacks' 52-6 loss to the Bulldogs in Starkville, Miss., last Saturday.

According to the Arkansas Democrat-Gazette, Pulley and Curl were seen taking pictures with and talking to female members of the MSU squad prior to warmups.

"They will not be here today or yesterday or any part of this week for unacceptable behavior - actions that are completely unacceptable to anything we're about," Arkansas coach Chad Morris said Monday without specifically referencing the event at Mississippi State.

Pulley, a cornerback, has started nine games this season, and Curl, a strong safety, has started all 11 games for the Razorbacks (2-9, 0-7 SEC). Curl is the team's fourth-leading tackler with 53 and also has five pass breakups and a forced fumble. Pulley is the team leader with three interceptions and 10 passes defended.

Cornerback Montaric Brown, a redshirt freshman, and freshman safety Myles Mason have served as backups at those positions this season and could start against Missouri (7-4, 3-4).

Asked about the incident following the game, Arkansas senior linebacker Dre Greenlaw said he was not aware of players talking with cheerleaders, but added, "That's not something I would do. I surely wasn't doing it.

"Some people have got different focuses. Obviously, you could see this game we weren't in the right mindset."

The loss of Pulley and Curl is notable as the Razorbacks prepare for one of the SEC's best passing teams in the season finale. Missouri senior quarterback Drew Lock is averaging 264 yards per game and is completing 63 percent of his attempts.

Lock has passed for 760 yards and seven touchdowns in the Tigers' past three games, wins over Florida, Vanderbilt and Tennessee.