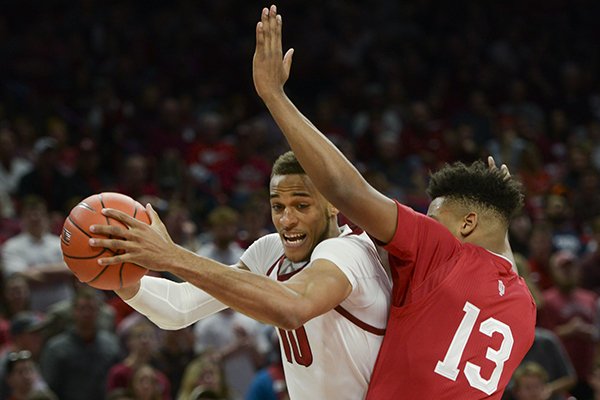 FAYETTEVILLE -- Three times in the final 10:40 of Sunday's game in Walton Arena, Indiana took a lead against the University of Arkansas. The Hoosiers also tied the score with 5:43 left.

Each time, Daniel Gafford scored a basket to put Arkansas ahead.

Gafford, a 6-11 sophomore from El Dorado, hit 12 of 15 shots and scored a career-high 27 points in the Razorbacks' 73-72 victory. His previous high was 25 points against Fresno State last season.

"Every time I would touch the ball, I would either miss and get the rebound or I would go up and get a foul."

Gafford matched his career high with 12 rebounds, including five on the offensive end.

"To be honest with you, this is the first time we've seen that type of presence," Indiana Coach Archie Miller, whose team fell to 3-1, said of facing Gafford and his 7-4 wingspan. "This will give us a little bit more information on what we need to do as we get ready to play more guys like him."

Gafford became more aggressive in the second half when he hit 9 of 10 shots.

"I thought our guys did a good job of really identifying and getting the ball to him," Arkansas Coach Mike Anderson said. "He was determined to make plays. He had the mismatch.

"It was good to see him step up and answer the call."

Arkansas sophomore forward Gabe Osabuohien hit the first three-pointer of his career with 25.7 seconds left in the first half to give the Razorbacks a 38-35 lead.

"I thought one of the bigger plays was Gabe hitting that three-point shot," Coach Mike Anderson said. "That kind of gave us a little lift going into halftime. Because we had a lead and they cut into it, and we get a three-point shot right there to come out in the second half and I thought we came out with pretty good energy."

Osabuohien missed his first six three-point attempts, going 0 of 4 last season and 0 of 2 to start this season.

Daniel Gafford finished with three turnovers -- half of his average in the first two games. He had six turnovers against both Texas and California-Davis.

Arkansas sophomore guard Mason Jones had seven assists without a turnover in 38 minutes. He had assists on baskets by five of his teammates.

Daniel Gafford had three baskets with Jones assists and Jalen Harris, Isaiah Joe, Gabe Osabuohien and Reggie Chaney each scored a basket thanks to a Jones' assist.

Arkansas is 3-0 at home against Big Ten teams at Arkansas with victories over Michigan, Minnesota and Indiana.

Arkansas is 2-1 against Indiana. The teams split their first two games with the Hoosiers beating the Razorbacks 75-50 at home during the 1949-50 season and Arkansas winning 86-72 in the first round of the 2008 NCAA East Regional.

Indiana Coach Archie Miller is 0-2 in Walton Arena. He was Dayton's coach when the Razorbacks beat the Flyers 69-55 during the 2014-15 season.

Miller is 1-2 against Arkansas, including Dayton's 85-81 overtime victory at home during the 2015-16 season when the Razorbacks were 2-3 in overtime games.

Tom Ostrom was back in Walton Arena as an assistant coach for Indiana. Ostrom was an Arkansas assistant for John Pelphrey from the 2007-08 through 2010-11 seasons.